NASA – Astronaut Mark Lee tests the new backpack called Simplified Aid for EVA Rescue (SAFER), a system designed for use in the event a crew member becomes untethered while conducting an EVA. The Lidar-In-Space Technology Experiment (LITE) is shown in the foreground. The LITE payload employs lidar, which stands for light detection and ranging, a type of optical radar using laser pulses instead of radio waves to study Earth’s atmosphere. Unprecedented views were obtained of cloud structures, storm systems, dust clouds, pollutants, forest burning, and surface reflectance. The STS-64 mission marked the first untethered U.S. EVA in 10 years, and was launched on September 9, 1994, aboard the Space Shuttle Orbiter Discovery. Space shuttle Enterprise made its first appearance mated to supportive propellant containers/boosters cluster, as it was rolled from the Vehicle Assembly Building at Kennedy Space Center en route to the launch pad, some 3.5 miles away, on May 1, 1979. Enterprise underwent several weeks of fit and function checks on the pad in preparation for STS-1, on which its sister craft Columbia took astronauts John Young and Robert Crippen into space for a 54-hour test mission. A new era in space flight began on April 12, 1981, when the first shuttle mission soared into orbit from NASA’s Kennedy Space Center in Florida. STS-1 commander John Young had already flown in space four times, including a walk on the moon in 1972. Bob Crippen, the pilot, was a Navy test pilot who would go on to command three future shuttle missions. But nothing either man had done or would do was quite like this.

The shuttle was humankind’s first re-usable spacecraft. The orbiter, which many people think of as the “shuttle,” would launch like a rocket and land like a plane. The two solid rocket boosters that helped push them into space would also be re-used, after being recovered in the ocean. Only the massive external fuel tank would burn up as it fell back to Earth. It was all known as the Space Transportation System.

On a long list of firsts, one stunning fact stands out: it was the first time in history a new spacecraft was launched on its maiden voyage with a crew aboard. On the craft’s maiden voyage, the crew of space shuttle Columbia took this image that showcases the blackness of space and a blue and white Earth, as well as the cargo bay and aft section of the shuttle. The image was photographed through the flight deck’s aft windows. In the lower right corner is one of the vehicle’s radiator panels. The pentagon-shaped object in the upper left is glare caused by window reflection.

STS-1, Columbia’s maiden voyage, launched on April 12, 1981, and was the inaugural flight in the Space Shuttle Program. Columbia and its crew were lost during STS-107 mission in 2003. As the shuttle lifted off from Kennedy Space Center on Jan. 16, a small portion of foam broke away from the external fuel tank and struck the orbiter’s left wing. The resulting damage created a hole in the wing’s leading edge, which caused the vehicle to break apart during reentry on Feb. 1. Astronauts Story Musgrave, left, and Don Peterson float in the cargo bay of the Earth-orbiting space shuttle Challenger during their April 7, 1983, spacewalk on the STS-6 mission. Their “floating” is restricted via tethers to safety slide wires. Thanks to the tether and slide wire combination, Peterson is able to translate, or move, along the port side hand rails.

First called STA-099, Challenger was built to serve as a test vehicle for the Space Shuttle program. Challenger, the second orbiter to join NASA’s Space Shuttle fleet, arrived at Kennedy Space Center in Florida in July 1982.

Challenger launched on her maiden voyage, STS-6, on April 4, 1983 and saw the first spacewalk of the shuttle program, as well as the deployment of the first satellite–the Tracking and Data Relay System. The orbiter launched the first American woman, Sally Ride, into space on mission STS-7 and was the first to carry two U.S. female astronauts on mission STS-41-G.

The first orbiter to launch and land at night on mission STS-8, Challenger also made the first Space Shuttle landing at Kennedy Space Center, concluding mission STS 41-B. Spacelabs 2 and 3 flew aboard the ship on missions STS 51-F and STS 51-B, as did the first German-dedicated Spacelab on STS 61-A. A host of scientific experiments and satellite deployments were performed during Challenger’s missions.

Challenger’s service to America’s space program ended in tragedy on Jan. 28, 1986. Just 73 seconds into mission STS-51L, a booster failure caused an explosion that resulted in the loss of seven astronauts, as well as the vehicle. 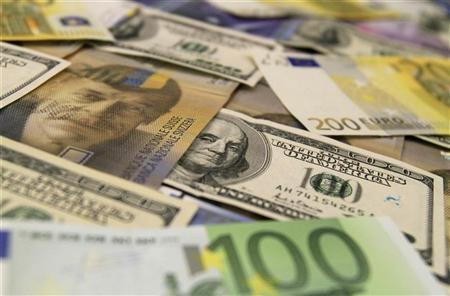 Reuters – Central banks from the world’s leading developed economies said on Wednesday they will take coordinated steps to prevent a lack of liquidity in the global financial system, as the euro zone attempts to find a way to stem its debt crisis.

The U.S. Federal Reserve, the European Central Bank and the central banks of Canada, Britain, Japan and Switzerland said in a joint statement they had agreed to lower the cost of existing dollar swap lines by 50 basis points from December 5. more> http://is.gd/sTf02E

By Ben Vickers – Chancellor Angela Merkel and French President Nicolas Sarkozy propose that a number of euro-zone members join a coalition that adopts strict fiscal rules, according to Germany‘s Welt am Sontag newspaper. This coalition could be formed by a fast-track stability pact that would require changes to the Lisbon Treaty–and Germany is working to convince members of Europe‘s Parliament that this would be possible without convening all EU members to a lengthy convention, Brian Parkin and Mark Deen report.

It appears Germany may force a choice upon euro members: either sign up for fiscal discipline and adjust your laws to avoid budget overruns now, or be left on the outside of the fiscal union to make your own way in the capital markets. more> http://is.gd/w2NAHi

How California can hit its mid-century emissions reduction goals By Kyle Niemeyer – The study was performed by a team from Energy and Environmental Economics, Monterey Institute of International Studies, UC Berkeley, and Lawrence Berkeley National Laboratory (all located in CA). Its authors took a much more detailed and accurate approach than previous work on the topic.

They built a model that broke down the CA economy into six energy-demand sectors (residential, industrial, transportation, agriculture, and petroleum) and two energy-supply sectors (fuel and electricity). The work also examined some cross-sectorial activities that produce nonenergy greenhouse gas emissions, such as cement production. The backbone of the model, explained in detail in the paper’s 117 pages of supporting material, involved calculating the rollover of infrastructure stocks, like cars, buildings, factories, and coal plants, across their planned lifetimes. It took into account turnover rates, realistic technological progress, and resource availability. more> http://is.gd/lds16p

By Mike Myatt – Among many other things, curiosity helps frame vision, advances learning, fuels passion, and drives innovation. Curiosity often inspires the courage to discuss the undiscussable, challenge current thinking, deviate from behaviors accepted as normal, and to do what others previously thought impossible. The best leaders understand that usual and customary are not necessarily synonymous with healthy and thriving.

It was Socrates who said: “The unexamined life is not worth living.” When was the last time you did some serious self-examination on how your curiosity, or the lack thereof, is impacting your ability to function as a leader?

CONGRESS WATCH Cost Estimate for S. 1867, National Defense Authorization Act for Fiscal Year 2012 Cost estimate for the bill as reported by the Senate Committee on Armed Services on November 15, 2011