Portrait of a Doomed Asteroid NASA – A new study provides a possible explanation of mysterious X-ray flares detected by the Chandra K-ray Observatory for several years in the region of Sagittarius A*, or Sgr A**. The study suggests a cloud around Sgr A*, a supermassive black hole at the center of our Milky Way Galaxy, which contains hundreds of trillions of asteroids and comets that have been stripped from their parent stars. The flares occur when asteroids of six miles or larger in radius are consumed by the black hole. An asteroid that undergoes a close encounter with another object, such as a star or planet, can be thrown into an orbit headed towards Sgr A*. If the asteroid passes within about 100 million miles of the black hole, roughly the distance between the Earth and the sun, it is torn into pieces by the tidal forces from the black hole. These fragments would then be vaporized by friction as they pass through the hot, thin gas flowing onto Sgr A*, similar to a meteor heating up and glowing as it falls through Earth’s atmosphere. A flare is produced and eventually the remains of the asteroid are swallowed by the black hole. Image Credit: Illustrations: NASA/CXC/M.Weiss

By Brady Dennis and Sari Horwitz – The government’s $25 billion settlement Thursday with banks over fraudulent foreclosure practices begins a long-promised reckoning with the financial industry over its role in the worst economic crisis since the Great Depression, officials said.

Officials acknowledged that the final sum will reach only a fraction of homeowners across the country whose homes are collectively worth $750 billion less than what is owed on their mortgages. But they argued that it was a meaningful step in healing the housing market. more> http://tinyurl.com/82rb2ag 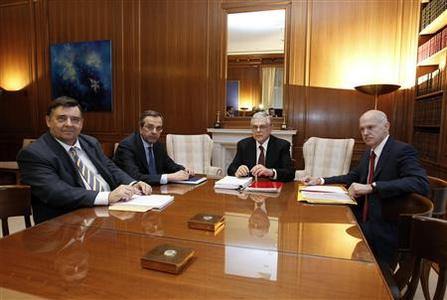 By Ingrid Melander and Tatiana Fragou – Before they release more aid, Greece‘s financial backers have demanded parliamentary ratification of the new austerity package this weekend, the identification of a further 325 million euros of spending reductions by next Wednesday and a strong commitment from all parties to implement the reforms.

But it may be a demand too far. Many Greeks, already suffering from five consecutive years of recession, are increasingly angry about the measures, which are unlikely to ease an economy, where one in five is unemployed, shops close one after another and households are tightening their budget. more> http://tinyurl.com/7uzo5z6

Is Harry Reid Slipping SOPA Into A New Cyber-Security Bill?

By Drew Bowling – After Internet commoners and companies alike pushed back in a determined way last month against the Stop Online Piracy Act and Protect IP Act, many were content to pat themselves on the back for defeating the bill. The bills, though, while delayed, were not convincingly defeated.

An article published last night on RT reports that Senate Majority Leader Harry Reid may be trying to resurrect SOPA by couching it within a new cyber-security bill. Worse, the new bill would also reawaken the proposed Kill Switch bill from last year. Kill Switch, another Internet-regulating bill that was lobbied by Sen. Joel Lieberman, would instill the White House with the executive power to shut down the Internet in response to a cyber threat. Awesome, right? more> http://tinyurl.com/89prets

Everything We Know About the Long-Term Unemployed

By Derek Thompson – See that graph? Click it. Print it. Tape it to your wall, and maybe give it some lamination. This is what the tragedy of long-term unemployment looks like, with the blue line tracking the quadrupling of those unemployed six months or longer.

The U.S. economy got some much-needed good news this afternoon when the January jobs report.

But here’s the really bad news: There are still 5.5 million people out of work for six months or longer. That’s enough to fill the state of Minnesota. And even this stat probably understates the crisis. Another 6 million people who should be in the labor force have stopped looking for work entirely. It’s safe to assume many of them dropped out of the market for jobs because they were unemployed for so long. Taken together, it’s an 11 million-person crisis. Big enough to fill Ohio. more> http://tinyurl.com/82gsmu2