NASA – This image combines data from four space telescopes to create a multi-wavelength view of all that remains of RCW 86, the oldest documented example of a supernova. Chinese astronomers witnessed the event in 185 A.D., documenting a mysterious “guest star” that remained in the sky for eight months. X-ray images from NASA’s Chandra X-ray Observatory and the European Space Agency‘s XMM-Newton Observatory were combined to form the blue and green colors in the image. The X-rays show the interstellar gas that has been heated to millions of degrees by the passage of the shock wave from the supernova.

By studying the X-ray and infrared data, astronomers were able to determine that the cause of the explosion was a Type Ia supernova, in which an otherwise-stable white dwarf, or dead star, was pushed beyond the brink of stability when a companion star dumped material onto it. Furthermore, scientists used the data to solve another mystery surrounding the remnant — how it got to be so large in such a short amount of time. By blowing away wind prior to exploding, the white dwarf was able to clear out a huge “cavity,” a region of very low-density surrounding the system. The explosion into this cavity was able to expand much faster than it otherwise would have.

This is the first time that this type of cavity has been seen around a white dwarf system prior to explosion. Scientists say the results may have significant implications for theories of white-dwarf binary systems and Type Ia supernovae.

RCW 86 is approximately 8,000 light-years away. At about 85 light-years in diameter, it occupies a region of the sky in the southern constellation of Circinus that is slightly larger than the full moon. This image was compiled in October 2011. Image Credit: X-ray: NASA/CXC/SAO & ESA; Infared: NASA/JPL-Caltech/B. Williams (NCSU)

Who Owns Your Personal History? By John Villasenor – In an era when nearly everything we do is recorded, we have less control over what we choose to remember, and perhaps more crucially, what to forget.

Today, we no longer have the option of burning our letters. Our digital tracks are everywhere–in email messages, tweets, text messages, social networking postings, and the visit histories of Internet sites. They are in the hands of family members, friends, acquaintances, current and former coworkers, people we barely remember, and people we prefer to forget. Our movements are logged through mobile devices, and our images are stored in the surveillance archives of retail stores, office buildings, taxis, and transit systems. more> http://is.gd/URHs7O

As Greece stares into the abyss, Europe must choose 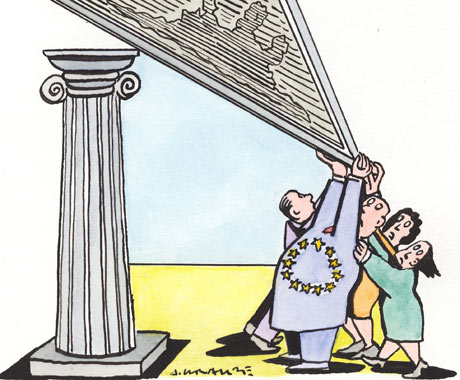 By Maria Margaronis – As I write, the Greek parliament is preparing to vote on the bond swap agreed with the country’s private creditors and on the new deal with the EU and the IMF, which would lend the country €130bn in exchange for cuts that slice the last little bits of flesh from the economy – including a 22% reduction in the minimum wage and 150,000 public sector job losses by 2016. Without the deal, Greece will default by March; with it, the country will sink into a still deeper depression, with no end in sight. more> http://is.gd/LLz3o1

Putting an end to Internet throttling

By Michael Geist – When the CRTC conducted hearings on Internet traffic management practices in the summer of 2009, most Internet providers used traffic shaping technologies to limit peer-to-peer applications arguing that it was necessary to manage subscriber demands and to avoid network congestion.

The CRTC rejected that advice and implemented guidelines that required Internet providers to publicly disclose their traffic management practices. Moreover, it established rules that require providers to respond to complaints by describing their practices, demonstrating their necessity, and establishing that they discriminate as little as possible.

Not much changed during the first two years. Over the past six months, however, the commission has prioritized the enforcement issue and when combined with changing Internet usage patterns and several dogged complainants, traffic shaping in Canada is about to disappear from the Internet landscape. more> http://is.gd/n3DWsN