Views from the Solar System (28)

Aurora Borealis Over the Midwest NASA – In this image taken on Jan. 25, 2012, the Aurora Borealis steals the scene in this nighttime photograph shot from the International Space Station as the orbital outpost flew over the Midwest. The spacecraft was above south central Nebraska when the photo was taken. The image, taken at an oblique angle, looks north to northeast.

Stemming the tide of overtreatment in U.S. healthcare 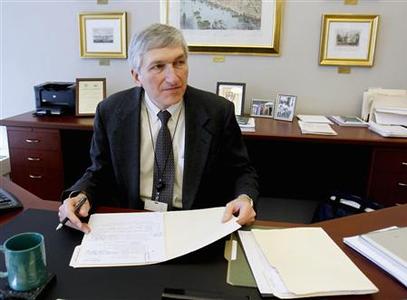 By Debra Sherman – A leading group of U.S. doctors is trying to tackle the costly problem of excessive medical testing, hoping to avoid more government intervention in how they practice.

“Excessive testing costs $200 billion to $250 billion (per year),” Dr. Steven Weinberger, CEO of ACP said in an interview from his office in Philadelphia. “There’s an overuse of imaging studies, CT scans for lung disease, overuse of routine electrocardiograms and other cardiac tests such as stress testing.”

In an article published last month in the Annals of Internal Medicine, the ACP cited 37 clinical situations where screening did not promote health and might actually hurt patients. more> http://is.gd/X5zgtl

By Jennifer Martinez – Lack of harmony, which erupted into public view earlier this week, promises to hamstring an effort to quickly pass a sweeping cybersecurity bill through the Senate.

The same day Lieberman revealed his bill, which was accompanied by choreographed floor speeches from its backers, top Republicans on seven other Senate committees wrote to Reid and McConnell to complain that the measure was being rushed. The GOP critics said the measure should be vetted — through hearings and markups — by their committees.

McConnell was quick to align himself with the group. more> http://is.gd/JsM9c7

By John Heilprin – The 10-million-franc ($11-million) satellite called CleanSpace One—the prototype for a family of such satellites—is being built by the Swiss Space Center at the Swiss Federal Institute for Technology in Lausanne, or EPFL.

The U.S. space agency NASA says over 500,000 pieces of spent rocket stages, broken satellites and other debris are being tracked as they orbit Earth.

By Jesse Hamilton – The U.S. Securities and Exchange Commission has told AT&T Inc. and other telecommunications companies they must include a resolution supporting wireless net-neutrality in annual shareholder votes.

“In view of the sustained public debate over the last several years concerning net neutrality and the Internet and the increasing recognition that the issue raises significant policy considerations, we do not believe that AT&T may omit the proposal from its proxy materials,” the SEC said in the Feb. 10 letter.