How We Got Here

Foreign Affairs – What follow are selections from our archives that tell the story of the ideological battles of the past century and the emergency of the modern order.

Harold J. Laski – “It is not, I think, excessive to argue that the experience of this generation leads most socially conscious observers to doubt the desirability of relying upon the money motive in individuals automatically to produce a well-ordered community. It is at least a matter of universal recognition that the collective intelligence of society must control all major economic operations. But the translation of that recognition into policy encounters difficulties of which the importance cannot be emphasized. For it asks men to part with power on an unexampled scale. It changes a system of established expectations profoundly rooted in the habits of mankind. It disturbs vested interests which are well organized, both for offense and defense, and accustomed by long tradition to have their way. No governing class in the history of the world has consciously and deliberately sacrificed its authority. . . . But the call to socialism, which the anarchy of capitalist society has produced, is, at bottom, a demand for economic egalitarianism in which the possessors are invited to sacrifice their power, their vested interests, their established expectations, for the attainment of a common good they will no longer be able to manipulate to their own interest. . . .”

What’s the Greek debt crisis all about? 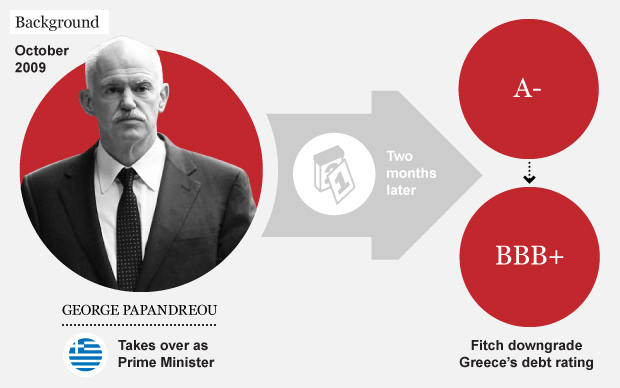 By Louise Armitstead – Despite being poor, the Greek government has for decades sought to be generous to its people. Historians point to the war-torn decades, including a civil conflict after the Second World War that wiped out 10pc of the population followed by bloody clashes between Cyprus and Turkey in 1974: the Greek state has tried to soothe its people by creating a big welfare state and generous pay and pensions – including low retirement age and the famous 13th and 14th monthly salaries.

When it came to joining the euro in 2001, it should have been obvious that Greece did not meet the debt conditions. But, by spinning the numbers, Greece gained entry, not just to the single market but to debt markets that allowed it to borrow as though it was as dependable as Germany. more> http://is.gd/vvLIvE

OK Cisco, we get it By Jim Duffy – Cisco is in danger of over-marketing. The company has been on an all-out assault against a Gartner study from 2010 that took issues with single-vendor networks in general and Cisco in particular. Since then, Cisco has issued no less than three unanswered counterpunches in an effort to refute, or get the media to refute, the Gartner study claiming that the TCO benefits of a single-vendor network are illusionary.

This week, Cisco is at it again, having issued a study by Deloitte Consulting – commissioned, of course, by Cisco – that again attempts to shoot holes into any benefits, real or perceived, that could be derived from a multivendor network. The study will serve as the bullet-scarred wall behind the public execution of multivendor networking tomorrow by Cisco via webcast.

OK. We get it. Cisco good, multivendor bad. more> http://is.gd/Jjz8Ui

By Elinor Mills – The Cybersecurity Act of 2012, introduced last weekby Sens. Joe Lieberman (I-Connecticut), John D. Rockefeller IV (D-West Virginia), Susan Collins (R-Maine), and Dianne Feinstein (D-California), is designed to protect the nation’s critical infrastructure, which provides vital services such as water, energy, and transportation. It calls on the Department of Homeland Security to work with network operators to develop security standards, a provision that Republican lawmakers, including Sen. John McCain (R-Arizona), object to on the grounds that government regulation will hinder innovation.

But representatives from the Electronic Frontier Foundation (EFF) and the Electronic Privacy Information Center have other concerns about the proposed legislation.

The measure gives authority for monitoring and defending against cybersecurity threats to “any private entity.” more> http://is.gd/LDwtmv