NASA – Ron Colantonio (left), manager of the Atmospheric Environment Safety Technologies Project at NASA’s Glenn Research Center in Cleveland, discussed with NASA Administrator Charlie Bolden the latest testing and research on airplane engine icing during the administrator’s February 2012 visit to the center. Colantonio showed Bolden how a large horizontal array of spray bars, such as those pictured, would emit a cloud of ice crystals in high-altitude, low pressure conditions that match those an airliner might experience in flight.

NASA scientists are mounting a research campaign using flight and ground tests to solve this aviation mystery, in which ice crystals associated with warm-weather storms can be ingested into the core of a hot jet engine, melt and then re-freeze. As larger amounts of ice build up, some of the ice can break off and cause damage inside the engine, or melt and cause the engine to lose power or shut down altogether in a flameout.

Part of the research effort involves using the spray bars to simulate the icing conditions in engines on the ground at the Propulsion Systems Laboratory at Glenn. Eventually, a full-scale engine will be mounted opposite the bar array Image Credit: NASA/Marvin Smith

Sandhya Somashekhar and Nia-Malika Henderson – In narrowly backing Mitt Romney, the electorate that turned out Tuesday for Michigan’s Republican presidential primary offered a snapshot of the front-runner’s strengths and weaknesses.

Romney, who was born and raised in Michigan, performed well among declared Republicans, voters with incomes above $100,000 a year, those whose top concerns were the federal deficit and the economy, and those keen on beating President Obama in the fall.

But he fared less well among “very conservative” voters, evangelical Christians and those who strongly support the tea-party movement.

Romney’s support was weaker among working-class voters, a group that was split about evenly between Romney and his chief rival Rick Santorum. more> http://is.gd/CkZsWs 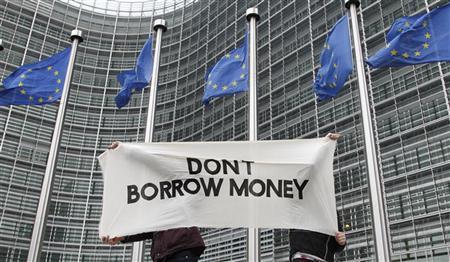 By Jean-Paul Fitoussi – THE way the Greeks and their government have been treated tells us a great deal about the way Europe is structured and the dangers that beset it. The technocratic leaders of Greece have lost the confidence of the people, who are rioting because the conditions attached to help from the rest of Europe are so stringent that Greece would be better off in the future without such “assistance.”

This is unfortunate because Europe has much better policy options. The crisis in Europe is more the consequence of an unbalanced Constitution than of an economic problem. In a nutshell, in Europe national debts are the responsibility of member nations, but the common currency is without a sovereign. more> http://is.gd/2g97uU

R&D Mag – At this time, wireless networks are able to brake just one bike, but in the future, the technical elements will be further developed to regulate entire trains as they travel over the lines. In view of that fact, computer scientists at Saarland University are designing mathematical calculations to check such systems automatically.

Professor Holger Hermanns, who holds the chair of Dependable Systems and Software, and who developed the wireless bicycle brake together with his group, explains: “Wireless networks are never a fail-safe method. That’s a fact that’s based on a technological background.” Nonetheless, the trend is to set up wireless systems that, like a simple bicycle brake, have to function all the time. more> http://is.gd/3QFywz

Averting a spectrum disaster: Now for the hard part

By Larry Downes – With new legislation authorizing incentive spectrum auctions, it’s tempting to think the crisis in mobile broadband has been avoided. But it will take at least 10 years to put new spectrum to work, and the FCC‘s own estimate is that we have only three years left before hitting the wall.

Barely a blip a few years ago, mobile broadband is growing at an astronomical pace. AT&T reports that since offering the iPhone on its networks in 2007, data volumes had increased by 8,000 percent by 2010. According to a report last week from the White House Council of Economic Advisers (PDF), mobile data traffic will increase twenty-fold between 2010 and 2015. more> http://is.gd/9lA9He