NASA – The remotely operated X-48C Blended Wing Body aircraft lifts off Rogers Dry Lake at Edwards Air Force Base, Calif., on its first test flight Aug. 7, 2012. The sub-scale technology demonstrator, modified from the prior X-48B configuration, is entering a new flight test phase in a partnership between NASA and The Boeing Company’s Phantom Works research and technology division.

The aircraft, designed by the Boeing Co. and built by Cranfield Aerospace Ltd. of the United Kingdom, is flying again in partnership with NASA. The new X-48C model, which was formerly the X-48B Blended Wing Body aircraft, was modified to evaluate the low-speed stability and control of a low-noise version of a notional, future Hybrid Wing Body (HWB) aircraft design. The HWB design stems from concept studies being conducted by NASA’s Environmentally Responsible Aviation project of future potential aircraft designs 20 years from now. Image Credit: NASA/Carla Thomas more> http://tinyurl.com/bsey64h 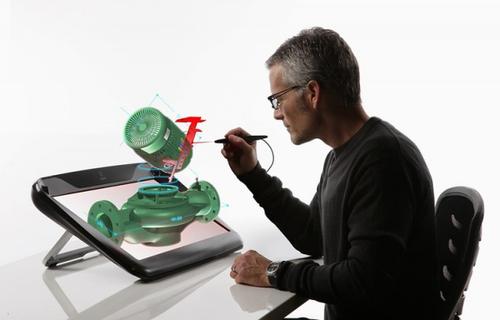 By Beth Stackpole – Are you a CAD or 3D design tool user feeling stuck in a rut? Do you think your creativity is being stifled by the limitations of your mouse? Don’t sweat it. There has been a burst of new, innovative technology advances that promise to change how engineers interact with their longstanding 3D design tools.

It’s not just 3D mice, though there have been some interesting developments on that front. Taking a page from smartphones and tablets, manufacturers are melding gesture-like capabilities into all sorts of input devices. more> http://tinyurl.com/8apw9k9

A Greek banker, the Shah and the birth of Libor By Kirstin Ridley and Huw Jones – Minos Zombanakis, born 86 years ago on a Greek island, remembers the birth of the interest rate benchmark now at the heart of a global rigging scandal well.

“I was, more or less, if you excuse the lack of modesty, the one who started the whole thing,” he laughs, speaking by telephone from his village among citrus orchards in Crete.

Zombanakis was running the newly-opened London branch of Manufacturer’s Hanover, now part of JPMorgan, when the bank organized one of the first syndicated loans pegged to what he dubbed a London interbank offered rate (Libor) in 1969. more> http://tinyurl.com/czrv6kv

All of that may be unnecessary in the future, however. MIT, Zhejiang University in China, and the University of Texas at Austin have devised a new “metamaterial” that keeps photons moving in only one direction. This, in turn, could pave the way toward chips that move data with light. more> http://tinyurl.com/c9jtgk8 English: Diagram of the National Broadband Network, based on the network design details given in the NBN Co’s Corporate Plan 2011-2013
(Photo credit: Wikipedia)

By Geoff Long – [Australia] NBN Co will move back to a model where it connects fiber to every house or apartment at the same time as it rolls fiber down the street – the so-called “build drop” method of customer connections. However, unlike in the past, it will not seek permission from every household before bringing fiber to the building – customers will have to specifically opt-out if they don’t want the fiber.

“One of the things that we have had to take into account of the additional costs of executing all this is a much greater level of communication with the general public,” NBN Co CEO Mike Quigley said, adding that the company anticipated that most households would see that the connection is not costing them anything and would be welcomed. more> http://tinyurl.com/cqzjyv6

Updates for the People

Voting and Elections pages for resources on voter registration, absentee ballots, volunteering at polls, and more.