NASA – In terms of intergalactic real estate, our solar system has a plum location as part of a big, spiral galaxy, the Milky Way. Numerous, less glamorous dwarf galaxies keep the Milky Way company. Many galaxies, however, are comparatively isolated, without close neighbors. One such example is the small galaxy known as DDO 190, snapped here in a new image from the NASA/ESA Hubble Space Telescope. (“DDO” stands for the David Dunlap Observatory, now managed by the Royal Astronomical Society of Canada, where the catalog was created).

DDO 190 is classified as a dwarf irregular galaxy as it is relatively small and lacks clear structure. Older, reddish stars mostly populate DDO 190’s outskirts, while some younger, bluish stars gleam in DDO 190’s more crowded interior. Some pockets of ionized gas heated up by stars appear here and there, with the most noticeable one shining towards the bottom of DDO 190 in this picture. Meanwhile, a great number of distant galaxies with evident spiral, elliptical and less-defined shapes glow in the background.

DDO 190 lies around 9 million light years away from our solar system. It is considered part of the loosely associated Messier 94 group of galaxies, not far from the Local Group of galaxies that includes the Milky Way. Canadian astronomer Sidney van der Bergh was the first to record DDO 190 in 1959 as part of the DDO catalog of dwarf galaxies.

Although within the Messier 94 group, DDO 190 is on its own. The galaxy’s nearest dwarf galaxy neighbor, DDO 187, is thought to be no closer than 3 million light years away. In contrast, many of the Milky Way’s companion galaxies, such as the Large and Small Magellanic Clouds, reside within a fifth or so of that distance, and even the giant spiral of the Andromeda Galaxy is closer to the Milky Way than DDO 190 is to its nearest neighbor. Image Credit: ESA/Hubble & NASA 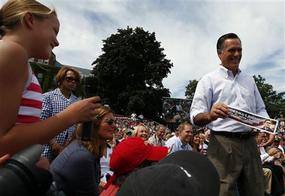 By Alina Selyukh and Alexander Cohen – The Obama and Romney campaigns are vying to become the most successful fundraising operations in U.S. history, with help from their national parties. In July, Romney raised $101 million for his campaign and the party, outpacing Obama for the third month in a row. Obama and the Democrats hauled in $75 million.

That money is an important gauge of firepower saved up for future advertising or investments in hiring, offices and events.

“Romney is ahead when you combine it all together but some of his money is going to be less efficient,” said Michael Malbin, who runs the non-partisan Campaign Finance Institute. “Obama is way ahead in the most flexible pile.” more> http://tinyurl.com/cyqhfgz By Peter Schroeder – With many areas of the country still digging out from the housing crisis, some local governments are considering taking on the underwater mortgages at a substantially lower price, thus making them more affordable for the borrower.

With policymakers at the federal, state and local level struggling to find a way to relieve the burden of unaffordable home loans, the eminent domain idea is being met with open ears.

The receptive response to the idea has put the financial sector on high alert. Firms are warning that a governmental action to seize private property to reduce its value could throw the entire housing market off kilter. more> http://tinyurl.com/8kc778b 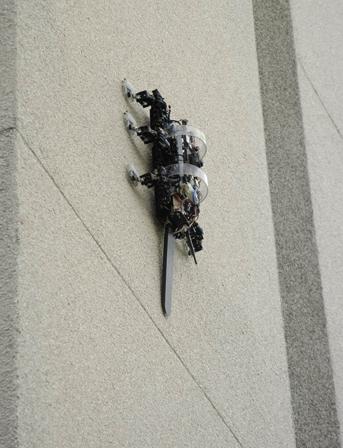 By Ann R. Thryft – A major area of robot research and development comes under the category of biomimetics, or biomimicry, which looks to nature for inspiration. Some robots resemble different kinds of animals. For example, Boston Dynamics‘ Cheetah has broken legged-robot speed records at 18mph. (It can’t match a real cheetah’s 70mph.) The company is well known for its pioneering development of robots that use motions based on animals to run and maneuver, such as the BigDog. more> http://tinyurl.com/9zk6f6v By Malcolm Turnbull – [Australia] The issue for customers is not the particular medium of communication connecting their device to the internet but rather the quality of the experience. If bandwidth is sufficient for their needs, then whether it is on HFC or VDSL or GPON or wireless or a combination of some or all of them is not particularly relevant if it is relevant at all.

It has to be remembered that the speed of connection is determined by the slowest segment of the network between the customer’s device and the server with which they are connecting which in many cases may not even be in Australia.

The NBN Co has no budget. It has a project the scope of which was given them by the government and they regularly provide estimates of what it will cost. There is no budget in the sense of a cap or ceiling on what they can spend. more> http://tinyurl.com/d3wsksd