NASA – The youngest member of an important class of objects has been found using data from NASA’s Chandra X-ray Observatory and the Australia Compact Telescope Array. A composite image shows the X-rays in blue and radio emission in purple, which have been overlaid on an optical field of view from the Digitized Sky Survey. This discovery, described in the press release, allows scientists to study a critical phase after a supernova and the birth of a neutron star.

Systems known as “X-ray binaries” are some of the brightest X-ray sources in the sky. They consist of either an ultra-dense star packed with neutrons — a.k.a., a “neutron star” — or a black hole that is paired with a normal star like the sun. As these two objects orbit one another, the neutron star or black hole pulls material from the companion star onto it.

A new study shows that the X-ray binary called Circinus X-1 is less than 4,600 years old, making it the youngest ever seen. Astronomers have detected hundreds of X-ray binaries throughout the Milky Way and other nearby galaxies. However, these older X-ray binaries only reveal information about what happens later in the evolution of these systems.

Astronomers were able to determine the age of Circinus X-1 by examining material around the orbiting pair. While the source itself has been known for decades, the neutron star is usually so bright that the glare from its X-ray light overwhelms any faint emission surrounding it. The new Chandra data were obtained while the neutron star was in a very faint state, which meant it was dim enough for astronomers to detect the faint afterglow created by the supernova explosion plowing through the surrounding interstellar gas. This, combined with characteristics of the radio emission, allowed the researchers to pinpoint the age of the supernova remnant. In turn, this information reveals the age of the neutron star since they were formed at the same time.

These results have been published in the December 4th issue of The Astrophysical Journal. In addition to those mentioned above, the other authors on this paper are Peter Jonker of the SRON Netherlands Institute for Space Research, Niel Brandt of Penn State University, Daniel Emilio Calvelo-Santos of the University of Southampton, Tasso Tzioumis of the Australia Telescope National Facility, Michael Nowak and Norbert Schultz of the Kavli Institute/MIT, Rudy Wijnands and Michiel van der Klis of the University of Amsterdam. 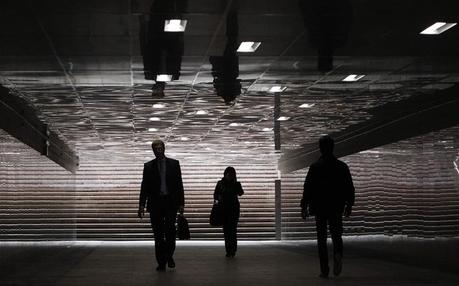 By Alan Wheatley – China’s foreign exchange reserves today stand at an unfathomable $3.66 trillion. Tens of millions of people have been lifted out of poverty by the rise of China and other poor countries plugged into global supply chains.

“Globalization constituted a significant, long-lasting and positive productivity shock that should have been met with tighter rather than easier monetary policy,” Bill White, a former chief economist of the Bank for International Settlements said in a speech to Omfif, a London think tank. more> http://tinyurl.com/ofbq36v

There Is No Left Brain/Right Brain Divide

By Stephen M. Kosslyn and G. Wayne Miller – The roots of the left/right story lie in a small series of operations in the 1960s and 1970s by doctors working with Roger W. Sperry, a Nobel-laureate neuroscientist at the California Institute of Technology. Seeking treatment for severe epilepsy, 16 patients agreed to let the doctors cut the corpus callosum, the main nerve bundle that joins the two halves of the brain. They found some relief from these dramatic visits to the OR €” and when they left the hospital, they allowed Sperry and his team to study their cognitive functioning.

In 1973, the New York Times Magazine published an article titled, “We Are Left-Brained or Right-Brained,” which began: “Two very different persons inhabit our heads €¦ One of them is verbal, analytic, dominant. The other is artistic €¦” TIME featured the left/right story two years later. Harvard Business Review and Psychology Today jumped in. more> http://tinyurl.com/lwh9fmx

By Rachel Nabors – “Alice in Wonderland” was one of my favorite stories growing up, and I wanted to return to it for inspiration. After some research, I realized that most interpretations of “Alice” since Disney’s animated version are in some way derivative of that film. Even hard-core or avant-garde interpretations like American McGee’s Alice video game and Camille Rose Garcia’s Down the Rabbit Hole artwork feature a girl in a blue dress with an apron, who often has blonde hair and blue eyes. It’s hard not to lean on the Disney version since it’s the one most people have experienced, but I was rather disappointed. All I could see were possibilities.

I was determined to update “Alice” for modern audiences €” and modern devices. But I also had to set realistic goals. This was a solo project, and without the assistance of other artists and front-end developers, I wouldn’t be able to do the entire story arc in the time allotted. So I reduced the story to one classic sequence: Alice, bored by her studious older sister, has trouble staying awake when she sees the classic white rabbit rush past her. She follows him down his burrow only to find herself transported to Wonderland. To help me stay on target, I rewrote this sequence in homage to Lewis Carroll and used it as a reference. more> http://tinyurl.com/m2pbu2o

America’s next big rip-off: Cars are the next subprime crisis! By David Dayen – Subprime auto loans – given to people with credit scores of less than 680 – account for 27 percent of all loans (pdf) for new vehicles in 2013, according to analyst Experian Automotive. That’s well above pre-recession levels. Financial firms have pushed strongly into auto loans of late, and are increasingly willing to fund subprime borrowers. This year, banks even sold $17.2 billion in auto loan-backed securities, which are bonds similar to the mortgage-backed securities that accelerated the housing bubble.

Just as water inevitably rolls downstream, big money has flooded into auto loans, the financial transactions with the fewest eyes on them. more> http://tinyurl.com/qz65cyg