A problem with Piketty’s explanation 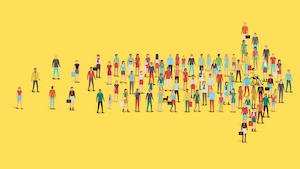 By Peter Turchin – In September I went to an international conference in Vienna, Austria, The Haves and the Have Nots: Exploring the Global History of Wealth and Income Inequality. One thing I learned at the conference is that, apparently, economists don’t really know why inequality increases and decreases. Especially, why it decreases.

Let’s start with Thomas Piketty, since Capital in the Twenty First Century is currently the “bible” (or should I say “Das Kapital”?) of inequality scholars.

Piketty provides a good explanation of why inequality increases. It’s good not in the sense that everybody agrees with it, but in the sense of being good science: a general mechanism that is supported by mathematics and by data.

So far so good. But how does Piketty explain the decline of inequality during the middle of the twentieth century? It was a result of unique circumstances—two destructive world wars and the Great Depression. In other words, and forgive me for crudeness, shit happens.

This is not a particularly satisfactory conclusion. Of course, it’s possible that the general trend of inequality is always up, except for random exogenous events that knock it down once in a while. So devastating wars destroy property, and by making the wealthy poorer reduce inequality. This is one of the inequality-reducing forces that Piketty mentions several times in his book.

To me such exogenous explanations are not satisfactory. My intuition (which I understand may not be shared by all) is that when inequality gets too high, there are forces that bring it down. In other words, to some degree it’s a regulatory process, and that’s why we don’t see truly extreme forms of inequality (when one person owns everything).

In Piketty’s view, the only reason we don’t see such extremes is because some kind of random event always intervenes before we get to it. more>