There is No Economics without Politics

Every economic model is built on political assumptions

By Anat Admati – There is absolutely no way to understand events before, during, and since the financial crisis of 2007-2009 while ignoring the powerful political forces that have shaped them. Yet, remarkably, much of the economics and finance literature about financial crises focuses on studying unspecified “shocks” to a system that it largely accepts as inevitable while ignoring critical governance frictions and failures. Removing blind spots would offer economists and other academics rich opportunities to leverage their expertise to benefit society.

The history of financial economics is revealing in this regard. By the second half of the 20th century, when modern finance emerged as part of economics, the holistic approach of early thinkers such as Adam Smith—which combined economics, moral philosophy, and politics—was long gone. Narrow social-science disciplines replaced the holistic approach by the end of the 19th century. In the 20th century, economists sought to make economics formal, precise, and elegant, similar to Newton’s 17th-century physics.

The focus in much of economics, particularly in finance, is on markets. Even when economists postulate a “social planner” and discuss policy, they rarely consider how this social planner gets to know what is needed or the process by which policy decisions are made and implemented. Collective action and politics are messy. Neat and elegant models are more fun and easier to market to editors and colleagues.

Lobbyists, who engage in “marketing” ideas to policymakers and to the public, are actually influential. They know how to work the system and can dismiss, take out of context, misquote, misuse, or promote research as needed. If policymakers or the public are unable or unwilling to evaluate the claims people make, lobbyists and others can create confusion and promote misleading narratives if it benefits them. In the real political economy, good ideas and worthy research can fail to gain traction while bad ideas and flawed research can succeed and have an impact.

Having observed governance and policy failures in banking, I realized that the focus on shareholder-manager conflicts is far too narrow and often misses the most important problems. We must also worry about the governance of the institutions that create and enforce the rules for all. How power structures and information asymmetries play out within and between institutions in the private and public sectors is critical. more>

Managing and supporting employees through cultural change in mergers

By Becky Kaetzler, Kameron Kordestani, Emily O’Loughlin, and Mieke Van Oostende – Mergers create vast organizational anxiety about the future: in most cases, the operating model and culture will change dramatically for one or both merging companies. These changes go far beyond a new name and senior leadership; they challenge the core of an organization’s identity, purpose, and day-to-day work. Even small tactical changes, like new expense policies or cafeteria options, can rattle employees. Anticipating and addressing these “organizational emotions” can set the foundation for seamless, effective integration. Failing to anticipate and address them can lead to poor business performance, a loss of critical talent, and the leakage of synergies.

Merging companies must shift the day-to-day behavior and mind-sets of their employees to protect a deal’s sources of value, both financial and organizational, and to make changes sustainable.

One basic problem is management’s tendency to focus mostly on changes that would directly help to capture a deal’s value targets while largely ignoring those required to maintain and enhance the company’s health. Organizational design, for example, is always top of mind in the early stages of merger planning, but companies often sidestep cultural differences until difficult issues come to light. At that point, the base business will already have suffered, top talent may already have looked for external opportunities, and the capture of synergies may have become more difficult.

A holistic, effective integration program should proactively address the full scope of changes your employees will experience in an integration. Managing through this kind of effort involves two broad tasks: embedding cultural changes and managing operational ones. more>

Posted in Business, Economic development, Economy, Education, How to, Net

Ciena’s role in recent 400G industry-first milestones
Are you confused about the recent 400G milestones announced and how this is different than what has been discussed for a few years? 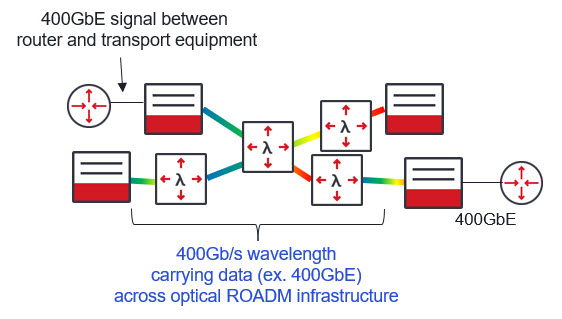 By Helen Xenos – In recent weeks, we have seen two 400G announcements come out, the first from AT&T followed by a second from Internet2, each speaking of achieving new milestones in the industry. To the casual observer, it may not be clear what is new about these announcements. Haven’t we been talking about 400G deployments for several years now? Well, yes and no.  To understand the importance of these announcements, you need to take a closer look. With Ciena innovations playing a key role in both cases, here are some insights.

The first point to understand is that in networking, 400G can mean different things. 400G is a term loosely used to describe a communications link that can carry 400 billion bits per second, or 400 Gigabits per second (400Gb/s). There are two types of 400G connections:

1) 400G wavelength: here, 400Gb/s are carried over a single carrier in a fiber optic cable that can transport a mix of different client traffic rates (ex. 10GbE, 100GbE or 400GbE) across long distances over an optical infrastructure. A coherent optical transponder is used to aggregate client traffic and transport them over a single 400G wavelength.

Apart from Ciena’s WaveLogic Ai, coherent optical solutions capable of 400G speeds are relatively new. WaveLogic Ai is the exception, with commercial, volume shipments beginning in the fall of 2017, and the foundation for the majority of 400G deployments in the industry to date.

The key value of WaveLogic Ai is that users can double traffic carrying capacity per wavelength versus 100G/200G solutions and reduce footprint, energy consumption and cost per bit. Network providers can select capacity rates from 100G to 400G and transport traffic at 400Gb/s for 300km distances, 200Gb/s for 3000km distances and 100G for ultra-long-haul links. more>

By Jeff Cockrell – To those who are worried about the state of contemporary American politics—those who are concerned about the historically high levels of polarization between the two main political parties, who despair of the disappearance of anything that could be called common ground, who bristle at the apparent unwillingness of any occupant of national, state, or local office to recognize the common sense or basic human decency of any proposal coming from the opposite side of the aisle—we offer you this single harmonious word of relief: antitrust.

A vocal concern for the power held by some of the United States’ most dominant companies—especially tech giants such as Facebook, Amazon, and Google—may be the only shared material among the talking points of President Donald Trump and the Democrats vying to run against him in 2020. Trump has asserted that the US should follow the European Union’s lead in handing down large fines to big tech companies for antitrust violations, and during his presidential campaign, he charged that Amazon has a “huge antitrust problem.” A number of prominent Democrats, including Bernie Sanders and Elizabeth Warren, are on the same page, having suggested that many such companies may need to be broken up. In July, the Department of Justice (DOJ) announced that it was “reviewing whether and how market-leading online platforms have achieved market power and are engaging in practices that have reduced competition, stifled innovation, or otherwise harmed consumers.”

Concerns about competition are not unique to the tech industry. Aggregate levels of US industrial concentration—or how market share is divided among manufacturing companies—began to increase in the early 1980s after decades of relatively little change, according to research by Chicago Booth’s Sam Peltzman. The trend continued into the 21st century. Between 1987 and 2007, average concentration—as measured by the Herfindahl-Hirschman index, a commonly used gauge of market concentration—within the 386 industries included in his analysis increased by 32 percent.

If this trend toward more-concentrated industries has been accompanied by a small number of companies expanding their market power as a result of diminished competitive pressures, the effects could be momentous. In fact, some research suggests the exercise of market power could be responsible for everything from higher prices to reduced investment to the steadily diminishing share of the US economy that’s enjoyed by the labor force. more>