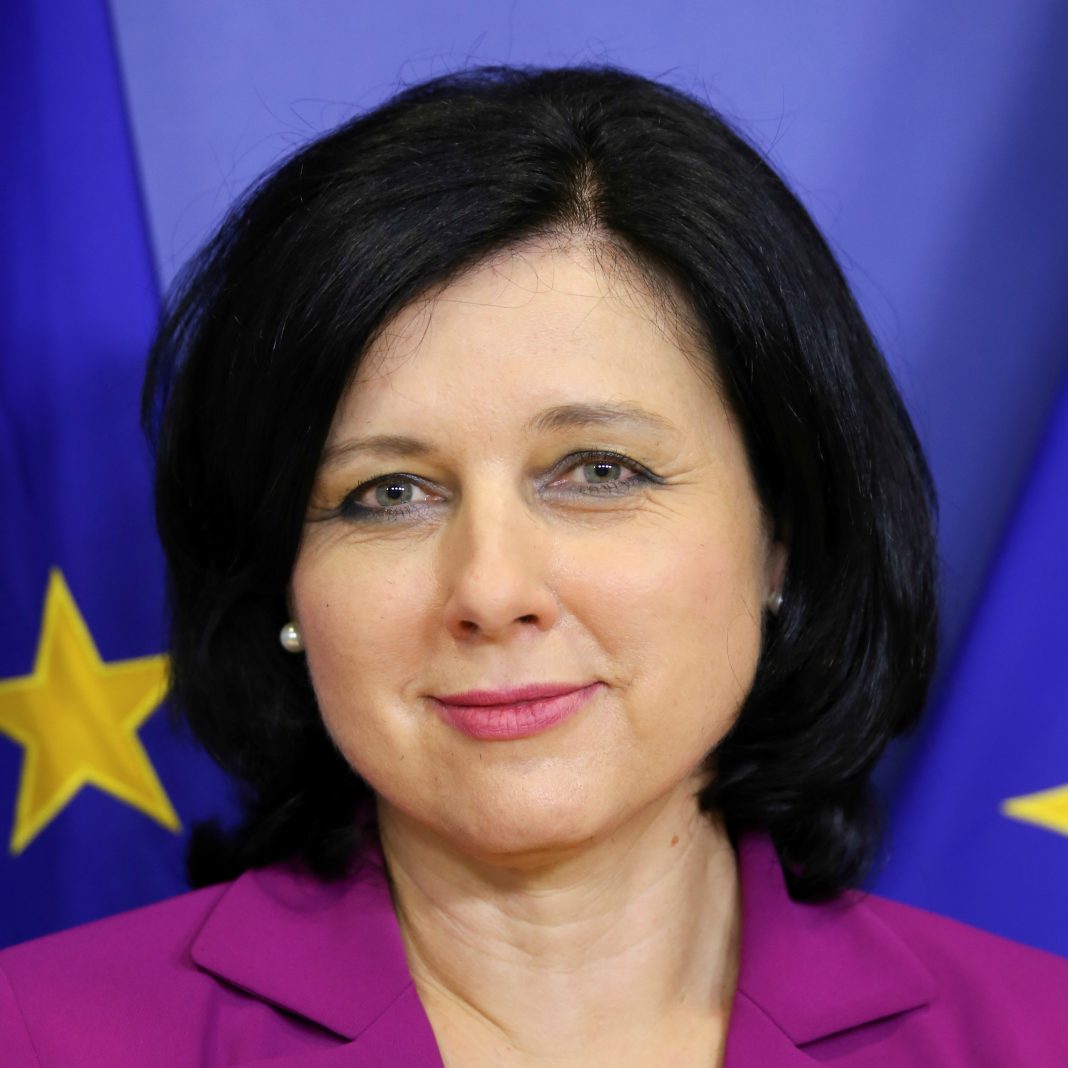 By Kassandra – “Internet and the platforms can be very important player(s) in the countries where we will see increased power of the government, decreased power of the media, shrunk space of the civil society, and all these factors which we don’t think belong to healthy democratic system. So we should not only think about how to regulate and whether to regulate, and how to minimize the power of big tech – or tech in general; not only big. But we should think about how to enhance and support the positive role which we see necessary.”

It is not, dear Commissioner (European Commission Vice-President for Values and Transparency, Věra Jourová), the platforms who are the heroes in these societies where democracy has fragmented but the people who champion democratic values on these platforms. The people whose lives are in danger when they speak out. The journalist, activists, and citizens who, tired of the reality they face, take a stand. If you turn platforms into heroes, perhaps then you should consider them as noble publishers, and not just conduits of information.

It’s as if she has forgotten the ‘bad surprise’ of Facebook’s Cambridge Analytica days, or that Google has been found to be functioning anticompetitively in a whole range of issues. This is not a matter of fine and collect. This anticompetitive behavior has been very damaging to European companies and citizens and that is why Jourová’s colleagues running the EU’s competition authorities intervened.

And if Jourová would like to pretend these ‘bad surprises’ are a thing of the past, we have only to look at the latest clashes with the platforms: The EU opening two competition cases with Apple and the awaited outcome of the EU’s probe on Amazon.

In the US – mounting pressure for Amazon CEO Jeff Bezos to testify in Congress eventually led to a nod from the company signalling this is going to happen.

Meanwhile, in Europe, instead of asking for accountability, and for Bezos to appear – much like Facebook’s Mark Zuckerberg – in the European Parliament to answer some questions, politicians like Jourová are happy to turn a blind eye. more>

An operating model for the next normal: Lessons from agile organizations in the crisis
Companies with agile practices embedded in their operating models have managed the impact of the COVID-19 crisis better than their peers. Here’s what helped them cope.

By Christopher Handscomb, Deepak Mahadevan, Lars Schor, Marcus Sieberer and Suraj Srinivasan – For many companies, the first, most visible effects of the COVID-19 pandemic quickly created a challenge to their operating and business models. Everything came into question, from how and where employees worked to how they engaged with customers to which products were most competitive and which could be quickly adapted. To cope, many turned to practices commonly associated with agile teams in the hope of adapting more quickly to changing business priorities.

Agile organizations are designed to be fast, resilient, and adaptable. In theory, organizations using agile practices should be perfectly suited to respond to shocks such as the COVID-19 pandemic. Understanding the experiences of agile—or partially agile—companies during the crisis provides insights around which elements of their operating models proved most useful in practice. Through our research, one characteristic stood out for companies that outperformed their peers: companies that ranked higher on managing the impact of the COVID-19 crisis were also those with agile practices more deeply embedded in their enterprise operating models. That is, they were mature agile organizations that had implemented the most extensive changes to enterprise-wide processes before the pandemic.

That suggests implications for less agile companies as economies reopen. Should they set aside the agile practices they adopted during the pandemic and return to their traditional operating models? Or should they double down on agile practices to embrace the more fundamental team- and enterprise-level processes that helped successful agile companies navigate the downturn?

We analyzed 25 companies across seven sectors that have undergone or are currently undergoing an agile transformation. According to their self-assessments, almost all of their agile business units responded better than their nonagile units to the shocks associated with the COVID-19 pandemic by measures of customer satisfaction, employee engagement, or operational performance.

Executives emphasized that the agile teams have continued their work almost seamlessly after the shock, without substantial setbacks in productivity. In contrast, many nonagile teams struggled to transition, reprioritize their work, and be productive in the new remote setup. The alignment between agile teams’ backlogs and their business priorities allowed them to shift focus quickly. more>

Why Restarting the Global Economy Won’t be Easy

By Jerry Grillo – As the world contemplates ending a massive lockdown implemented in response to COVID-19, Vinod Singhal is considering what will happen when we hit the play button and the engines that drive industry and trade squeal back to life again.

Singhal, who studies operations strategy and supply chain management at the Georgia Institute of Technology, has a few ideas on how to ease the transition to the new reality. But this pandemic makes it hard to predict what that reality will be.

“There is really nothing to compare this pandemic to,” he said. “And predicting or estimating stock prices is simply impossible, unlike supply chain disruptions caused by a company’s own fault, or a natural disaster, like the earthquake in Japan.”

But COVID-19 represents a new kind of mystery when it comes to something as complex and critical to the world’s economy as the global supply chain, for a number of reasons that Singhal highlighted:

“Many of these companies may go bankrupt,” he added. “So we need to figure out how to reduce the number of bankruptcies. Government is going to play an important role in this, and the stimulus package the U.S. has approved will be helpful.” more>

Yes, someone is to blame

A pandemic may be represented as a ‘natural disaster’. A global depression is however the product of ideology and powerful political actors.

By James K Galbraith and Albena Azmanova – An unprecedented economic crisis is descending on Europe. It is, the president of the European Central Bank, Christine Lagarde, declared recently to the European Parliament, the worst in peacetime.

In the United States, the Federal Reserve Bank reports the worst decline in output and employment in 90 years. The World Bank warns that the world is on the precipice of the deepest slump since 1945—with up to 60 million people pauperized, many in countries already poor.

Lagarde hurried to clarify that this vast human tragedy was, in her view, ‘of no one’s fault or making’—as if a medical crisis could metamorphose into a social crisis all by itself. The catastrophe is however the work of ideas, of politics and of policies.

In the US, testing was botched, delayed and is still not available on demand. In France, vast stocks of personal protective equipment, accumulated for the H1N1 epidemic, had been sold off, stored badly and ruined. In the United Kingdom and Sweden, the authorities thought first to let the virus run free, seeking ‘herd immunity’ at the implicit price of many thousands dead.

These were not mere mistakes or simple accidents: they were political decisions. They were consequences of an ideology built over decades. There were sins of commission and sins of omission—to invoke a pair of concepts developed by Hannah Arendt—their result a fragile economic structure, marked by precarity and primed for collapse.

The sins of commission came first. From the late 1970s, political leaders throughout the west embarked on the formidable project which came to be known as neoliberal capitalism. Deregulation, decentralization, privatization, balanced budgets and tight money were key elements of the ‘Washington consensus’ advanced by national elites and the international financial institutions, especially the International Monetary Fund. Public services and welfare programs were slashed, including critical expenditures on public health.

The initial goals were to break trade unions and curtail inflation, albeit at the expense of core manufacturing capability. more>