By Gordana Filipovic – “Europe must accept there are limits to austerity and that additional austerity won’t do anything but bring societies on the verge of collapse,” said Nobel laureate Paul Krugman, an economics professor at Princeton University. “No country will have prosperity until Germany and the ECB have decided that too much pain has been inflicted.”

In the U.S., where the recovery is struggling to gain traction, new fiscal stimulus should be “directed to distressed individuals” rather than companies, Krugman said. more> http://tinyurl.com/9j4prhw 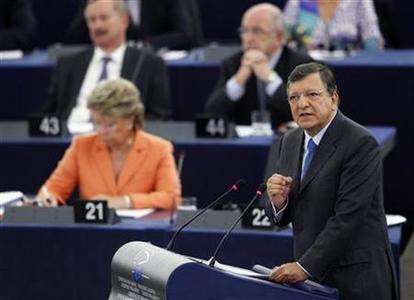 By Claire Davenport – The European Commission unveiled sweeping plans for the European Central Bank to supervise all euro zone banks on Wednesday (Sep 12), though Germany immediately raised objections that the proposals risked overstretching the ECB.

The reforms, which need to be approved by the European Union’s 27 member states, aim to break the link between struggling banks and heavily indebted governments, an interdependence that has exacerbated the debt crisis over the past three years.

By empowering the ECB to police all banks in the euro zone, the proposal hopes to break the vicious cycle and then lay the ground for deeper fiscal cooperation across the EU. more> http://tinyurl.com/9rnemyp

Development of balance sheet total of the Eurosystem (i.e., The European Central Bank and the central banks of the countries using the euro. Used on Kredietcrisis. To be updated regularly. Theoretically, this could be updated weekly, but I don't think I'll manage that. Data obtained from the ECB website, Statistical Data Warehouse, search query ILM.W.U2.C.T000.Z5.Z01. (Photo credit: Wikipedia)

“If you parked the ECB cash in government bonds then you’re losing money if you need to sell them to repay your own bondholders,” said Rabobank rate strategist Lyn Graham-Taylor.

“That has to worry banks. Effectively sovereigns and banks in Spain and Italy have become ever more closely tied together through the (ECB’s three-year tenders).” more> http://tinyurl.com/7sv48a2

Who is paying for the financial crisis?

New Europe – The real money has come from the European Central Bank (ECB), which handed $1 trillion to the Eurozone‘s banks. It was this trillion euro that paid for Greece‘s debts, rather than German taxpayers, and this is how – the ‘liquidity’ loans from the ECB went to 800 banks at a negligible interest rate of 1%.

In total, these lenders are expected to make a windfall profit of $300bn, just by lending the trillion euro during this period of time. The profits made will be enough to pay for the losses on Greece’s debt or any other Eurozone sinner’s default.

Clever? We don’t think so, because actually, it will be the Eurozone citizens who will foot the bill through higher inflation or via a necessary capital increase in the ECB to cover for the central bank’s losses from loans that will not be repaid – even if all those loans are paid back to the ECB, the fact remains that the borrowing banks will make profits of $300bn just by exploiting the trillion for three years. more> http://is.gd/dDAZ71

Bond market contagion is spreading across Europe. Italian 10-year bond yields have risen above 7 percent, unaffordable in the long term. Yields on bonds issued by France, the Netherlands and Austria — which along with Germany form the core of the euro zone — have also climbed. more> http://twurl.nl/2u0aur