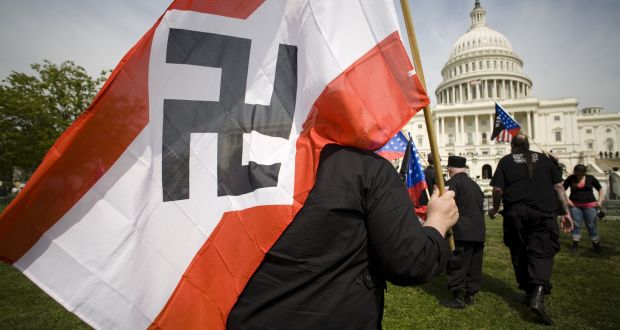 How Does Fascism Sneak Into Pop Culture?

The fascist tradition of using the arts as vehicles for expanding the movement is visible in the U.S. today, in some cases in eerily similar ways to the original rise of European fascism in the early 20th century.

In Futurism, we see some early examples of “cultural fascism,” if you will. Filippo Marinetti, founder of the Futurist movement, would be a good place to start. Futurism was founded in Italy in the early 1900s, and was one of the earliest proto-fascist and, in some cases, fascist movements. The idea [of Futurism] was to return to the noble myth [of] the new man who stands for family and tradition, but in a super-powered world of dynamism and adventure.

But if you look at the emergence of fascism and the development of fascism in its original form, one of the interesting things that you see in cultural avenues is that they are often primarily interested in disruption.

And, inevitably, there are liberals in mainstream institutions who accept the expressions of [fascist disruptors] insofar as it is expression, and insofar as it’s good to explore the arts and humanities. So there’s a tendency to accept these movements to some degree, and perhaps even adopt some of their mindsets under this position. This is incredibly dangerous, because fascism is so vitriolic and mercurial that it’s difficult to contain. more> https://goo.gl/gSRBwt