Siemens – Integrated hardware and software design and testing on electronic products are now part of a system of delivery needs, which can only be enforced by a tightly integrated and unified multi-discipline platform.

Today’s electronic devices are a synthesis of multiple designs—mechanical, electrical, electronics, embedded software and application software. In addition, because of rapid development, many hardware features remain unexplored and under-managed resulting in sub-optimal integration between hardware and software.

The disadvantages of operating in different single-discipline platforms and the increasing role of global suppliers in early stages of design are driving engineering organizations to invest in multi-domain integration strategies to ensure the system works flawlessly. more> By Maureen Jenkins – A fuel cell is an electrochemical device that converts hydrogen directly into electricity and heat without combustion. Because of this reaction, a fuel cell can be more than twice as efficient as an internal combustion engine.

Whereas a conventional engine burns fuel to create heat—in turn converting heat from mechanical energy into electricity—a fuel cell produces electricity, water and heat directly from hydrogen and oxygen. Fuel cells are powered by hydrogen, one of the most abundant elements on the planet. There are different fuel cell types, with Proton Exchange Membrane fuel cells considered to be the most versatile for mass-market applications. These cells contain a solid electrolyte, making it less sensitive to shock and vibration than other fuel cell types—and well-suited to portable and mobile applications.

When fueled with hydrogen, these fuel cells have zero pollutant emissions, have a low noise profile, and can be used to generate heat (for hot water) and power (in a combined heat and power system). They are non-polluting because the only byproduct is pure water. But even when fuel cells are operated using hydrocarbon fuels, pollutant levels are still significantly lower than those produced through traditional combustion.

Engineers can combine multiple fuel cells to form a “fuel cell stack.” They may use a stack on its own with a direct hydrogen source or integrate it with a number of other components to provide an operational power system tailored for a specific application. —Source: Intelligent Energy Ltd.

This Fuel Cell Startup Could Spark a Revolution GE – A fuel cell works like a battery, using a simple chemical reaction to provide energy. In fuel cells, this reaction involves hydrogen molecules abundant in natural gas and oxygen from ordinary air.

It sounds easy enough, but the process is full of pitfalls. Car companies, for example, have tried to make fuel cells work as a replacement for the internal combustion engine for more 20 years without commercial success.

But scientists in GE labs recently cracked an important conundrum involving one iteration of the technology called solid oxide fuel cell, or SOFC.

The fuel cell has no moving parts. The guts of the cell look like a stack of cookies. Each cookie is a metallic plate with a maze of flow channels cut into the bottom and a square of black “icing” on top.

That icing is the core of the breakthrough that makes the solid oxide fuel cell work. It contains three layers made from special ceramic materials: the cathode on top, the anode on the bottom, and a dense layer of solid oxide electrolyte in the middle.

By Tina Hilding – Fuel cells offer a clean and highly efficient way to convert the chemical energy in fuels into electrical energy.

A solid-oxide fuel cell is similar to a battery in that it has an anode, cathode, and electrolyte and creates electricity. But it uses fuel to create a continuous flow of electricity. The process could be approximately four times more efficient than a combustion engine because it is based on an electrochemical reaction. The solid-oxide fuel cell is different from other fuels cells in that it is made of solid materials, and the electricity is created by oxygen ions traveling through the fuel cell. more> http://tinyurl.com/m6lrweo 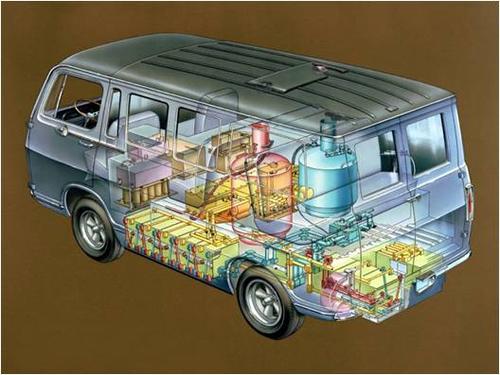 By Charles Murray – Hydrogen fuel cells aren’t positioned to solve the world’s energy needs, but they are enjoying a revival of sorts.

The revival could probably be tracked back to 2009, when seven global automakers (Daimler, Ford, GM, Honda, Hyundai-Kia, Renault-Nissan, and Toyota) signed a letter of intent to commercialize the technology by 2015. Back then, the idea was to prop up hydrogen’s sagging future by having automakers introduce vehicles that would help spur infrastructure development. more> http://tinyurl.com/ptybf4v

By Richard Harth – The electrons Geobacter acquires from its photosynthetic partner Chlorobium can be measured and collected in the form of electricity, using a device known as a microbial fuel cell (MFC)€”a kind of biological battery. A basic schematic for a conventional MFC is shown in figure 1.

Satoshi Ogiso, a top Toyota engineer who helped develop the original Prius 20 years ago, said Wednesday that the new Prius will get significantly better fuel economy than its current 50 miles per gallon (4.7 liters per 100 kilometers). It will have an advanced battery, motor and gas engine combination that is smaller, lighter and cheaper than the current version.

Zero-emission fuel cell cars are not likely to be big sellers until there are more hydrogen fueling stations on U.S. roads. more> http://tinyurl.com/pkymunf

By Caroline Perry – Materials scientists at Harvard have demonstrated an equivalent feat in clean energy generation with a solid-oxide fuel cell (SOFC) that converts hydrogen into electricity but can also store electrochemical energy like a battery. This fuel cell can continue to produce power for a short time after its fuel has run out.

“This thin-film SOFC takes advantage of recent advances in low-temperature operation to incorporate a new and more versatile material,” explains principal investigator Shriram Ramanathan, associate professor of materials science at the Harvard School of Engineering and Applied Sciences (SEAS). “Vanadium oxide (VOx) at the anode behaves as a multifunctional material, allowing the fuel cell to both generate and store energy.” more> http://tinyurl.com/9dx6mkb