Why such an imperfect union?

US political dysfunctionality is put down to partisanship and polarization. But Sheri Berman argues, by a west-European comparison, it’s the issue agenda that counts.

By Sheri Berman – The 2020 election was the most traumatic and dangerous in modern American history. Its legitimacy was indefensibly questioned by Republican elites and voters, helping to motivate an insurrection designed to block its outcome.

What explains the diametrically opposed narratives of the 2020 election advanced by Republicans and Democrats and the broader democratic dysfunction of which this is a manifestation? One common explanation focuses on ‘hyper-partisanship’ and polarisation.

In the decades following World War II in the United States, party identification and voter loyalty were relatively weak, Democratic and Republican voters and elites relatively ideologically heterogenous, and vote-switching or split-ticket voting (choosing different parties in national and state-level elections) relatively common. By the early 21st century, however, the situation had changed dramatically: partisan identities had become deeply felt and entrenched, Democratic and Republican elites and voters had become more ideologically homogenous and distinct from each other, and vote-switching and split-ticketing voting had become relatively uncommon.

Scholars and commentators argue these trends have led Democratic and Republican partisans to view each other as dangerous or threatening, rather than simply people with different political views and preferences, caused anger and resentment to become the dominant features of political discourse and interactions, and turned politics into a zero-sum game where compromise is anathema. In such hyper-partisan, polarized contexts extremism can thrive and anti-democratic moves against opponents seem acceptable or even necessary. more>

A Warning From Europe: The Worst Is Yet to Come 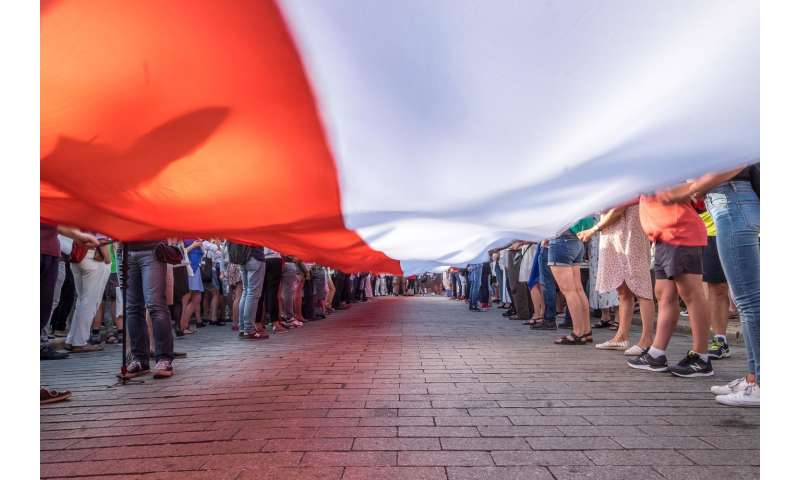 By Anne Applebaum – That moment has passed. Nearly two decades later, I would now cross the street to avoid some of the people who were at my New Year’s Eve party. They, in turn, would not only refuse to enter my house, they would be embarrassed to admit they had ever been there.

In fact, about half the people who were at that party would no longer speak to the other half. The estrangements are political, not personal.

Poland is now one of the most polarized societies in Europe, and we have found ourselves on opposite sides of a profound divide, one that runs through not only what used to be the Polish right but also the old Hungarian right, the Italian right, and, with some differences, the British right and the American right, too.

Perhaps this is unsurprising. All of these debates, whether in 1890s France or 1990s Poland, have at their core a series of important questions: Who gets to define a nation? And who, therefore, gets to rule a nation? For a long time, we have imagined that these questions were settled—but why should they ever be?

You can call this sort of thing by many names: nepotism, state capture. But if you so choose, you can also describe it in positive terms: It represents the end of the hateful notions of meritocracy and competition, principles that, by definition, never benefited the less successful. A rigged and uncompetitive system sounds bad if you want to live in a society run by the talented.

But if that isn’t your primary interest, then what’s wrong with it?

More to the point, the principles of competition, even when they encourage talent and create upward mobility, don’t necessarily answer deeper questions about national identity, or satisfy the human desire to belong to a moral community. The Fall of the Deal-Maker

By Kenneth T. Walsh – America’s polarization and political dysfunction have become structural, built into the system as never before. President Donald Trump didn’t create the situation in which the country finds itself, increasingly divided into irreconcilable camps, but Trump is intensifying the hard feelings all around. And things are getting worse.

Trump has suffered a huge blow to his reputation as a deal-maker.

The billionaire real-estate developer pledged during the campaign to use his deal-making skills to outsmart and overpower the power structure in Washington and force the elites bend to his will. It isn’t happening. And he has little of consequence to show legislatively for his first six months in office, aside from winning Senate confirmation of Neil Gorsuch to the Supreme Court.

One of Trump’s problems is that he can’t keep from tripping over himself. When things seem to be going his way, he unleashes angry and off-message comments on Twitter, and he appears to be a bully, an undisciplined braggart and a nasty politician who strikes many as unlikable.

Washington insiders generally say he would be better off staying on message – talking about his steps to improve the economy, cut regulations, stimulate the business sector, reduce the size and cost of government, and attack the status quo in Washington. more> https://goo.gl/njA1P1

How the Obama phenomenon and Trump earthquake happened

By Reid Wilson – The Hill spent months digging deep into decades of data that illustrate the nation’s changing demographics, economics, culture and politics.

Those glimpses of a changing America are evidence of a series of countervailing demographic, political and economic forces that have long exerted themselves on the nation — and now define the quadrennial struggle between two sides of the political aisle that are deeply polarized along race, class, economic and educational lines.

At the center of the divide are two sets of divergent trends.

The first set contrasts the changing face of America, which is being hastened by the rising influence of the most diverse generation in American history, with a radical political shift among the nation’s still-dominant cohort of older whites, who now act as a more homogenous voting bloc than ever before.

The second set reflects the changing nature of how Americans live, work and build economic power. A generations-long trend toward wage stagnation, automation and globalization is in the final stages of exterminating the blue-collar manufacturing jobs that once sustained America’s middle class in the heartland. more> https://goo.gl/YgDUA0