What Is the Line Between Self-Interest and Selfishness?
The debate has raged for 300 years and counting.

By John Paul Rollert – The pursuit of self-interest. Sounds like a harmless phrase, right? And yet no matter of modern political economy is more subject to controversy than the moral status of this motive force. What should we make of it?

In my business ethics classes, I tell A Tale of the Two Shirts, an allegory of sorts for the ethics of self-interest and its evolution over the past few hundred years. To set the stage, I take my students back to the 18th century, to the dispute that most inflamed the earliest days of capitalism: whether to embrace commercial self-interest at all.

Long before paeans to self-interest were a mainstay of microeconomics classes, the instinct was strictly frowned upon. To declare that a zeal for one’s personal affairs should be the spur to a thriving society was to effectively announce that one was wicked and insane. Wicked, because the notion that an individual should be guided by what is best for himself rather than the people around him smacked of the devil’s business. Insane, because the idea that a community propelled by such an instinct wouldn’t soon collapse into chaos was so entirely counterintuitive as to be ridiculous on its face. If, as the philosopher Thomas Hobbes maintained, a world ungoverned by the iron fist of some central authority soon gave way to a war of all against all, private pursuits were a luxury no society could afford. more> 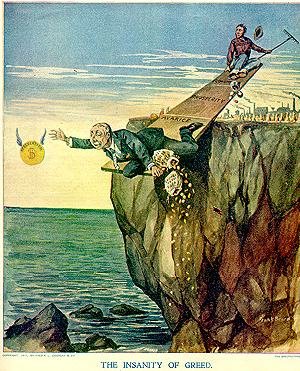 By Eric Liu, Nick Hanauer – Politics in democracy can be understood many ways, but on one level it is the expression of where people believe their self-interest lies— that is to say, “what is good for me?”

While the degree to which human beings pursue that which they think is good for them has not and will probably never change, what they believe is good for them can change and from time to time has, radically.