Whistle-blowers act out of a sense of morality 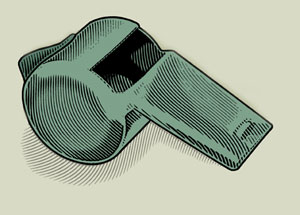 By Alice G. Walton – Say you witness a coworker subtly misleading a client, or rounding off sales numbers in her favor. Do you report it, or not?

Chicago Booth postdoctoral scholar James A. Dungan, Boston College’s Liane Young, and Northwestern’s Adam Waytz looked at what goes into the calculation people make when considering whether to report bad behavior. Moral concerns figure highly, they find, above employees’ feelings about their employers, fear of reprisal, and satisfaction with the recognition and rewards they receive at their job.

To understand the factors that predict the likelihood of whistle-blowing, the researchers analyzed data from more than 42,000 participants in the ongoing Merit Principles Survey, which has polled US government employees since 1979, and which covers whistle-blowing. Respondents answer questions about their past experiences with unethical behavior, the approaches they’d take in dealing with future unethical behavior, and their personal characteristics, including their concern for others and their feelings about their organizations.

Concern for others was the strongest predictor of whistle-blowing, the researchers find. This was true both of people who had already blown the whistle on bad behavior and of people who expected they might in the future.

Loyalty to an immediate community—or ingroup, in psychological terms—was also linked to whistle-blowing, but in an inverse way. “The greater people’s concern for loyalty, the less likely they were to blow the whistle,” write the researchers.

Organizational factors—such as people’s perceptions about their employer, their concern for their job, and their level of motivation or engagement—were largely unconnected to whether people spoke up. more>