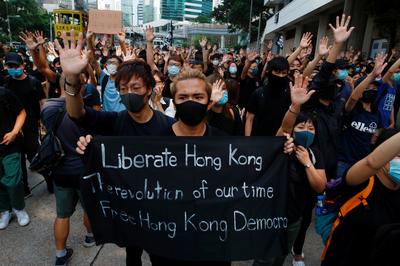 Hundreds of black clad pro-democracy demonstrators outside Hong Kong’s High Court on Wednesday chanted “Liberate Hong Kong, revolution of our times”, as a leading activist appeared to appeal a six-year jail sentence for rioting in 2016.

The court’s walls were scrawled with graffiti reading: “History will absolve us”, “If we burn you burn with us” and “No turn back 4HK”.

The Asian financial hub is struggling to recover from a weekend of violent clashes between police and tens of thousands of protesters, with parts of the city virtually cut off due to a paralyzed metro that was a target of vandalism.