On Capitol Hill, lawmakers are planning a variety of measures to salvage the chaotic situation — but many fear that the damage is already done, even as Secretary of State Mike Pompeo and Vice President Mike Pence announced a so-called “ceasefire” agreement giving Turkish President Recep Tayyip Erdogan a 20-mile buffer zone that he has sought on the Turkey-Syria border.

“To an extent, the egg may be scrambled, but we have an obligation to do whatever we can,” Sen. Richard Blumenthal, D-Conn., after a closed-door briefing with Joint Chiefs Chairman Gen. Mark Milley and Defense Secretary Mark Esper on Thursday morning.

Source: US Lawmakers Fear The Damage Is Done On Syria – Defense One

The White House defense against Democrats’ impeachment inquiry suffered a major blow Thursday with acting chief of staff Mick Mulvaney’s admission that aid for Ukraine was linked to President Trump’s desire for the country to pursue a political probe related to the 2016 election.

Kurdish forces who fought alongside the U.S. against the Islamic State group served as an essential bulwark protecting the Washington’s goal of negotiating a peace that would secure its political interests in Syria’s future and in the wider region. But any sense of cooperation the Kurds felt with the U.S. is now dashed. And questions remain about whether the Trump administration can deliver on the terms of a dubious cease-fire agreement with Turkey that Vice President Mike Pence announced Thursday in Ankara.

“By acquiescing to the Turkish invasion and evacuating its forces from northeastern Syria, the U.S. has sacrificed – free of charge – its only remaining leverage over a political settlement for all of Syria,” says Fred Hof, who served as special adviser for Syria to President Barack Obama in the early days of conflict there.

Source: Trump Abandoned Partners in Syria. Here’s What Comes Next | The Civic Report | US News

National gun control groups are pouring money into Virginia ahead of the state’s November legislative elections, seeking to energize voters frustrated by the way Republican lawmakers shut down a special session on gun violence called in the wake of a deadly mass shooting in Virginia Beach this spring and hoping to score a win in what some say is a bellwether for next year’s national races.

According to recent polling, gun violence is the most important issue to Virginia voters heading into next month’s election. Tankers that had been scheduled to install emissions-cutting equipment ahead of stricter pollution standards starting in 2020 have deferred their visits to the dry docks to capitalize on an unexpected surge in freight rates, three trade sources said.

U.S. sanctions on subsidiaries of vast Chinese shipping fleet Cosco in September sparked a surge in global oil shipping rates as traders scrambled to find non-blacklisted vessels to get their oil to market. When night falls in the Indian village of Nabipur, the backyard furnaces come to life, burning waste tires from the West, making the air thick with acrid smoke and the soil black with soot.

Not long ago, Nabipur was a quiet farming village in northern India. Now the village is home to at least a dozen furnaces burning a steady stream of tires to make low-quality oil in a process known as pyrolysis.

Global trade in waste tires has almost doubled in the past five years, mainly to developing countries like India and Malaysia, according to customs data provided to the United Nations.

Source: Trading tires: How the West fuels a waste crisis in Asia – Reuters 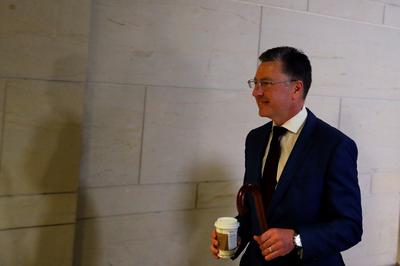 The U.S. House of Representatives’ impeachment inquiry into whether President Donald Trump abused the power of his office to push the Ukrainian president to order an probe of a political rival has heard from a series of administration insiders over the past two weeks.

Trump has acknowledged many of the central facts related to the call, maintaining that none of it amounted to wrongdoing.

Source: Factbox: What has the testimony to the impeachment inquiry on U.S. President Trump revealed? – Reuters The White House’s turnabout by tweet in Syria has not only shredded the last bit of America’s credibility as a trustworthy ally and security guarantor in Middle East; it has also effectively destroyed the already slim chances of brokering an end to the war and some kind of sustainable peace, possibly for years to come.

With fewer American boots on the ground and relations with Syrian Kurdish leaders fractured, the U.S. has little room now to influence outcomes on the ground in Syria. What started as a policy of equivocation about the indispensability of American leadership in the Middle East under the Obama administration in 2012 is now, seven years later under Trump, a policy of American capitulation to Russian aggression and appeasement of Turkey’s worst authoritarian impulses.

Any hope that the U.S. might be able to positively shape the outcomes of the multiple, interlocking proxy wars in Syria all but evaporated as Russia rushed to fill the vacuum left by a hasty exit of U.S. Special Forces from northern Syria and as Turkey appeared determined to wipe out a sizable portion of Syria’s Kurdish population.

Source: Trump’s Syria Exit Destroyed the Slim Chances of Brokering an End to the War

Hollywood, ground zero of China’s success at managing the developed world, has not released one major movie with a Chinese villain since 1997. In one film, the 2012 dud Red Dawn, editors actually swapped out Chinese baddies for North Koreans in post-production.

In April 1868, a delegation of Chinese officials visited the United States. Among them was a Manchu mandarin named Zhigang who one of the first Chinese travelogues describing a visit to the West. Zhigang wrote reams on American shipbuilding, steel mills, microscopes, and printing presses. Zhigang also had an insight about the resilience of American values that his successors in Beijing understand today. In America, he noted, “the love of God is less real than the love of profit.”

Or as the straight-shooting Jason Whitlock said on the Fox Sports show Speak for Yourself the other day, “Quit faking the funk … When China tells you to shut the hell up, everybody shuts the hell up. Everybody loses their courage when there’s money on the line.”

While we have seen the consequences of Trump’s character throughout his presidency, no series of crises has demonstrated his profound flaws more thoroughly and completely than the twin foreign policy scandals in Ukraine and Syria.

All of the character traits that Trump’s critics most feared are present — including his petty corruption, his temperamental unfitness, and his rank incompetence.

Source: Trump’s Character Always Made Him Unfit to be President | Time