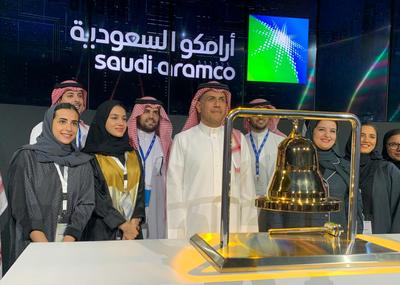 Saudi Aramco (2222.SE) shares surged the maximum permitted 10% above their IPO price on their Riyadh stock market debut on Wednesday, in a move hailed by the government as a vindication of its towering $2 trillion valuation of the state oil company.

Aramco raised a record $25.6 billion in its IPO last week, the culmination of a years-long effort by the Crown Prince to open up the energy giant to outside investors and raise funds to help diversify the economy away from oil.

Saudi retail investors who hold their Aramco shares for six months from the first day of trading can get up to 100 bonus shares, or one for every 10 held, which could limit supply of the stock, said Zachary Cefaratti, CEO of Dalma Capital.