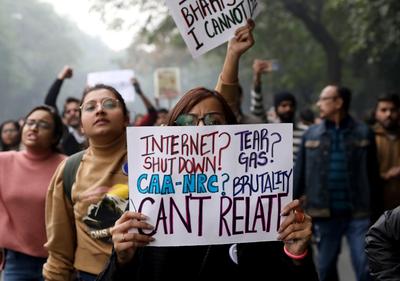 Hundreds of Indians held for defying a ban on demonstrating against a controversial new citizenship law continued their protest in police detention on Thursday.

Public anger over the new law widely considered to be discriminatory is building across the country, with marches and rallies planned despite bans on public gatherings in several areas, raising the possibility of further violence and arrests.

The government ban has been imposed in parts of the capital New Delhi, and throughout the states of Uttar Pradesh and Karnataka.

Train stations around Red Fort were shut to prevent protesters joining the rally, and authorities also ordered mobile carriers to suspend internet services in some parts of the capital.

“As per the directive received from the government, data services are stopped at a few locations,” Vodafone Idea’s customer care tweeted in response to a user’s question about its network in Delhi.