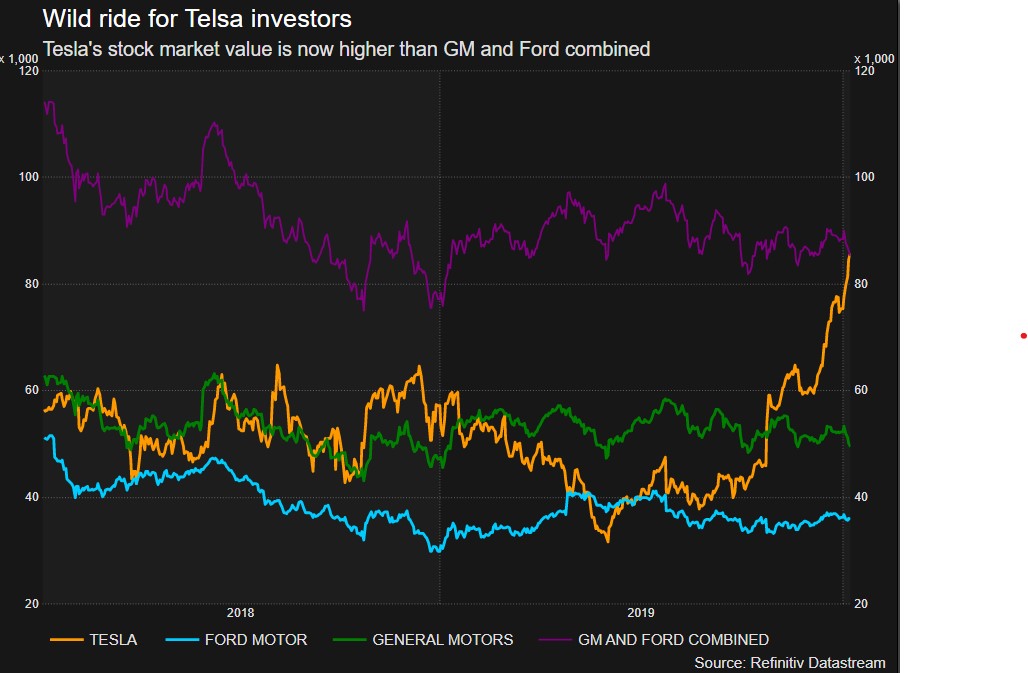 The Silicon Valley electric car maker’s stock jumped nearly 5% on Wednesday, closing at a record $492.14 per share and elevating its market capitalization to almost $89 billion, or $2 billion larger than the sum of General Motors’ and Ford’s respective market caps of $50 billion and $37 billion.

Source: Tesla’s market value zooms past that of GM and Ford – combined – Reuters Whenever President Donald Trump does something insane in the realm of foreign policy, which is to say whenever he does anything at all in that realm, his defenders attempt to construct some rational explanation.

Sometimes, this is funny — like when the Wall Street Journal reported that Trump wanted to buy Greenland and his supporters had to pretend that attempting to buy the autonomous territory from Denmark was some stroke of genius.

But mostly, the frantic search for reason amid a sea of nonsense is driven by cognitive dissonance: Americans handed the sole and unfettered authority to use thousands of nuclear weapons to a man who is super interested in nuking the hell out of hurricanes.

When one thinks about it that way, it isn’t really funny at all — unless you are really into Tom Lehrer.

The Procurement Collusion Strike Force, set up by the Justice Department last November, is designed to educate vendors and procurement officials about bid-rigging and prosecute offences. Attorneys for vendors are warning that efforts by the new group to police bid-rigging and other antitrust violations in government procurement could get off to a rocky start.

“There is a steep learning curve in the first few years,” for these types of dedicated strike forces, David Douglass, partner in international law firm Sheppard Mullin’s government contracts, investigations and international trade practice group, said during a Jan. 8 Coalition for Government Procurement webinar on the strike force.

Nonetheless, Douglass and his colleagues said they expect to see an increase in procurement investigations in the coming months.

The United States is making a final pitch to Britain ahead of a UK decision on whether to upgrade its telecoms network with Huawei equipment, amid threats to cut intelligence-sharing ties, people with knowledge of the matter told Reuters.

Britain is expected to make a final call on how to deploy Huawei equipment in its future 5G networks later this month, weighing U.S.-led allegations that the equipment could be used for Chinese state spying against Britain’s relationship with Beijing and industry warnings that banning the firm outright would cost billions of dollars.

Source: ‘Shot across the bow’: US steps up pressure on UK ahead of Huawei decision – EURACTIV.com 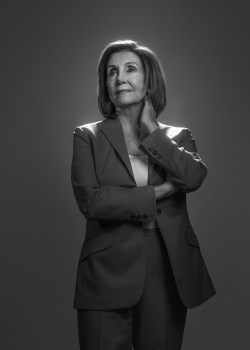 “Apart from declaring war, this is the most important thing that the Congress can do,” she finally says. “I’m most proud of the Affordable Care Act. But this is the most serious initiative that I’ve been involved in in my career.”

Pelosi has spent decades at the highest levels of politics, but the past 12 months have been arguably her most consequential.

Source: Why Nancy Pelosi Is Going All in Against President Trump | Time

Now, a new study in Personality and Social Psychology Bulletin suggests one method to get people thinking about their duty to future generations is to think about the past.

At the moment, they argue, key decision makers are faced with a dilemma: their own interests conflict with the interests of future generations. Working out how to increase this intergenerational reciprocity, therefore, could be an important way to influence positive policymaking.

Source: Thinking About Past Generations Could Help Us Tackle Climate Change – Research Digest 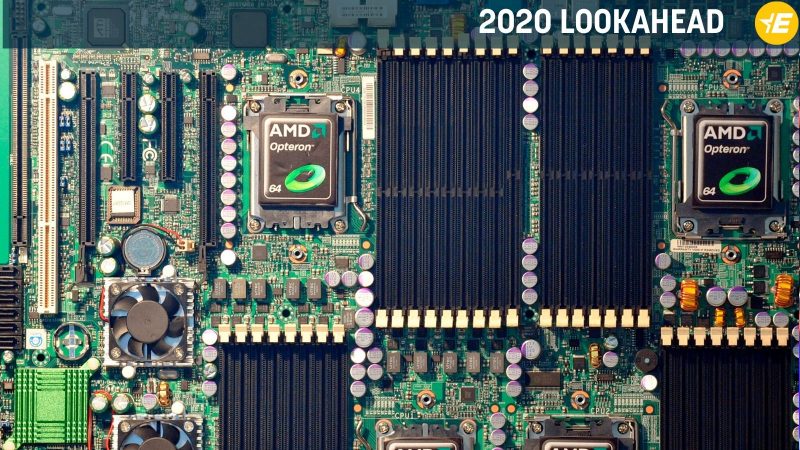 Departing from a tumultuous 2019, in which several tech behemoths faced the ire of European regulators, the forthcoming twelve months in the digital arena will prove to be lively in terms of EU policy.

2019 saw EU Commissioners hit out at online platforms for their lack of effort in targeting disinformation online, G7 ministers highlighting the ‘serious risks‘ of Facebook’s Libra ‘coin,’ a gradual fracturing of the EU market in terms of a 5G strategy, concerns mounting over the broader employment of Artificial Intelligence technologies, and the adoption of one of the most divisive files in the history of intellectual property law – the copyright directive.

The French government continues to defend its pension reform proposal initially recommended by the European executive. Although it has since been watered down, its divisiveness has led to the paralysis of the transport system for almost a month. EURACTIV France reports.

It would seem that President Emmanuel Macron is taking a gamble with his proposal to reform – or at least pretend to reform – the pension system, notably to give guarantees to his European partners. But the head of state appears to be at an impasse.

Pension reform is an important point in the European Commission’s recurring recommendations for France. Last summer, the Ecofin Council, which brings together EU ministers, highlighted the issue, stressing that reform could help alleviate public debt. 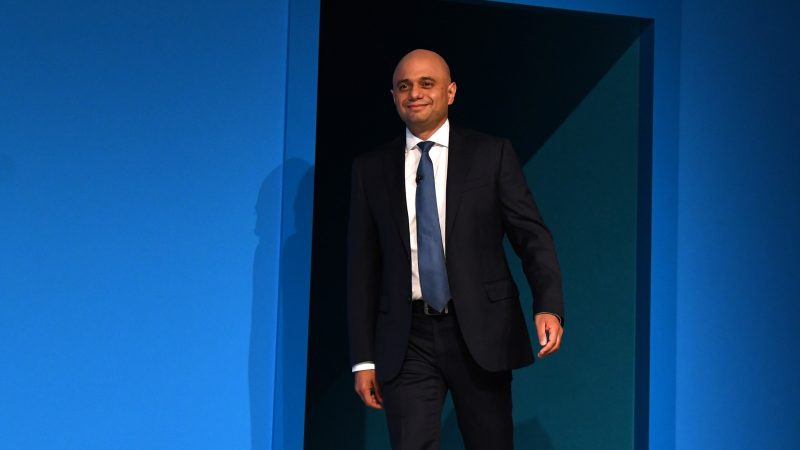 Britain is to unveil its first post-Brexit budget on March 11, the government said on Tuesday (7 January), promising increased public service spending and an end to a decade of austerity.

The government cancelled its previous budget scheduled for November 6 after Prime Minister Boris Johnson called an early election to try to break parliamentary deadlock over Brexit.

Finance minister Sajid Javid said the budget would “unleash Britain’s potential, uniting our great country, opening a new chapter for our economy and ushering in a decade of renewal”.

In recent months, Javid has already promised billions of pounds of extra investment in the health service, schools and police, after 10 years of cuts imposed by the financial crisis.

Croatian Prime Minister Andrej Plenković made it clear that Croatia, the latest EU newcomer, wants to join as soon as possible the Union’s inner circles – the borderless Schengen space and the Eurozone.

Plenković met on Wednesday (8 January) with a group of 60 Brussels-based journalists on a press trip to Zagreb on the occasion of the inauguration of the Croatian Presidency of the Council of the EU.

Apart from the priorities of the Croatian Presidency which have been highlighted in previous days, Plenković stressed that for his country, there were two major national goals – joining Schengen and the Eurozone.