President Trump came into office talking a big game on “currency.” China was going to be named a manipulator on day one (never mind that it was selling dollars to prop up its currency at the time). American allies would no longer get a free pass to take advantage of America economically—an argument that, at least in principle, should have put on notice those countries using government policy to keep their exchange rate undervalued to support their exports.

Yet Trump hasn’t actually been a big innovator on currency policy. The big changes have come elsewhere (a “shopping list” trade policy toward China for example).

Source: All Sound and No Fury? Will The Trump Administration Get Tough on Currency in April? | Council on Foreign Relations For days, I have been trying to craft a blog on the topic of the current state of conflict across the Middle East. My efforts started before the Christmas holiday when I was trying to update an opinion article I published in the Houston Chronicle in early December about how widening political unrest across the Middle East and beyond could lower the operational resilience of oil producers within the Organization of Petroleum Exporting Countries (OPEC) to respond to unexpected events that could hit global oil markets in 2020.

But events on the ground have been fast moving and while this basic point about oil is obviously relevant, it seems now any geopolitical analysis has to start with a better understanding of the geopolitical conditions emerging in the aftermath of the U.S. attack that killed Iranian Commander Qasem Soleimani.

Every nation has core strategic interests that do not vary with the personalities leading them or the nature of the ideological bent of a particular ruling elite.

We often forget that in U.S. foreign policy and it leads us to mistakes.

President Donald J. Trump’s administration has refused to join other WTO members in appointing new judges. Down to one member, the tribunal is unable to hear new appeals. Trump and his anti-trade enablers have justified their intransigence with the same kinds of lies that have been typical in the president’s actions in so many other areas of public responsibility.

Repeatedly, they have made charges against the Appellate Body that are either false or trumped up. This technique seems to have worked—for now.

But their actions are not worthy of the United States. Americans must do better than this if we still hope to work with others and provide positive leadership for the world.

Source: A Final Chapter for the WTO? Five Experts Give Their Assessments | Council of Councils

As the second decade of this century comes to a close, effective multilateral cooperation seems to be on the ropes. The Donald J. Trump administration has abandoned U.S. global leadership, brazen geopolitics have returned with a vengeance, and populist leaders have exploited public dissatisfaction with globalization to chip away at European and broader global integration.

Existing international organizations, meanwhile, have failed to respond adequately to the aspirations of rising nations and the challenges posed by climate change, protectionism, and cyber threats, among myriad other issues.

Six summits in 2020 will help determine whether a multilateral renaissance is possible.

Source: Six Global Summits to Watch in 2020 | Council of Councils

Each year, during the Lunar New Year celebrations, a small Arctic Chinatown takes shape near Norway’s border with Russia and Finland. It’s an indication of how China, though a non-Arctic state, is increasingly eyeing opportunities in the region.

Shops decorated with lightboxes, Chinese signs and a Paifang-inspired arch appear in the pedestrian zone of Norway’s Arctic town of Kirkenes, “welcoming the future as the most important city on the Polar Silk Road,” according to the town’s official website.

“China is a new player,” Rune Rafaelsen, the mayor of Sør-Varanger, a municipality in the far northeast corner of Norway, told EURACTIV.

As the world pushes for stronger climate measures to stop the destruction of the Arctic, many countries are also keen to take advantage of the region’s new opportunities in shipping, mining, drilling and security.

Meanwhile, the Arctic’s own inhabitants want to have a bigger say in the region’s development, aware that outsiders might be less eager or able to strike a balance between economic exploitation and environmental protection.

A few months ago, the Norwegian ministry of foreign affairs was left baffled by rather remarkable statements from the French Defence Minister Florence Parly, who presented the brand new French defense strategy for the Arctic.

In its preamble, the new strategy document states, “the Arctic belongs to no-one” and “only cooperation between states will lead to meaningful results”, and went on to quote former French Prime Minister Michel Rocard comparing the Arctic to a lawless Middle East.

Ring isn’t just a product that allows users to surveil their neighbors. The company also uses it to surveil its customers.

An investigation by EFF of the Ring doorbell app for Android found it to be packed with third-party trackers sending out a plethora of customers’ personally identifiable information (PII). Four main analytics and marketing companies were discovered to be receiving information such as the names, private IP addresses, mobile network carriers, persistent identifiers, and sensor data on the devices of paying customers.

The danger in sending even small bits of information is that analytics and tracking companies are able to combine these bits together to form a unique picture of the user’s device. 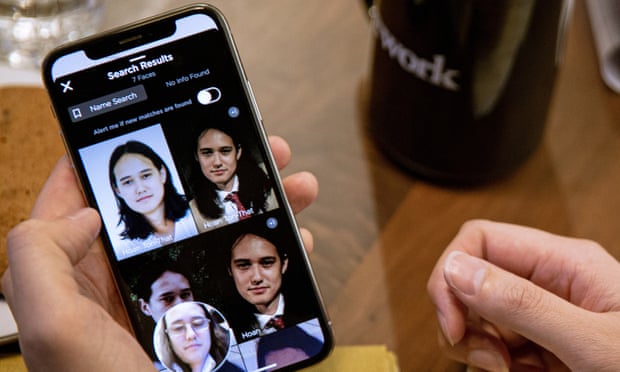 All of which makes one wonder why there was such a fuss the other week when the New York Times published a big exposé of Clearview AI, a tiny company based in New York.

“The secretive company that might end privacy as we know it”, read the breathless headline over the story about a start-up that helps law-enforcement authorities to match photos of unknown people to their online images.

Was it because Peter Thiel – the creepy billionaire geek from central casting – had been an early investor?

Or because Hoan Ton-That, the ingenious co-founder of Clearview, had once, like Thiel, been traduced by Gawker?

Or because the other co-founder was a guy who used to work for Rudy Giuliani, Trump’s lawyer?

Or was it simply because the article revealed to an astonished – and hopefully alarmed – lay public the extent of the capabilities of facial recognition technology?

After all, what it suggests is that if you have ever had your photograph published online then the cops (and presumably any other Clearview client) can find and identify you.

For me, the most noteworthy thing about Clearview AI is that it’s such a small outfit. Essentially, Ton-That created it by hiring two hackers.

Source: Quick, cheap to make and loved by police – facial recognition apps are on the rise | John Naughton | Technology | The Guardian

In an interview with EURACTIV Germany, business IT specialist and former German Green candidate, Laura Sophie Dornheim, spoke about her quest against online hate, her own experience with it, as well as “crowbar” women’s quotas in the tech sector and politics.

So it’s about socialization, not about innate differences in interests?

The “Nature vs. Nurture” debate is a sham debate. There is certainly an innate part, but it is small. The influence of socialization can be proven.

Would it be for politicians to intervene in this case? Could they issue state bans?

Prohibitions can be very useful in principle, but in the case of such cultural phenomena, they can only get you so far. A few small things could nevertheless be done: we have a huge backlog in education, where stereotypes are perpetuated. But cultural aspects are difficult to change through laws, even if it is sometimes frustrating.

Are you still in favor of a quota for women?

Yes. It’s a crowbar, but it works. That’s how female role models are created, as this is the way to change culture and thinking. This also applies to politics: men mainly write internet regulation.

Source: IT specialist: Gender quotas is ‘how female role models are created’ – EURACTIV.com

Modernization and structural problems are some of the biggest challenges for rural areas across Europe, along with shrinking demographics, urban migration or digital transformation. Smart villages, an increasingly popular concept among EU members, are set to counter all those negative trends.

The main idea behind the concept is to encourage people to take initiative and find solutions in order to adapt to ongoing changes. This includes support for various forms of local cooperation or the use of digital technologies.

“In short, smart village is mainly about people and for people. It is a return to the partially lost roots in the countryside, to common sense, which our society is lacking,” noted Miloslav Oliva, chairman of the Regional Association of the National Network of Local Action Groups of the Czech Republic.

Source: Smart village is a remedy for outflow of people from rural areas – EURACTIV.com