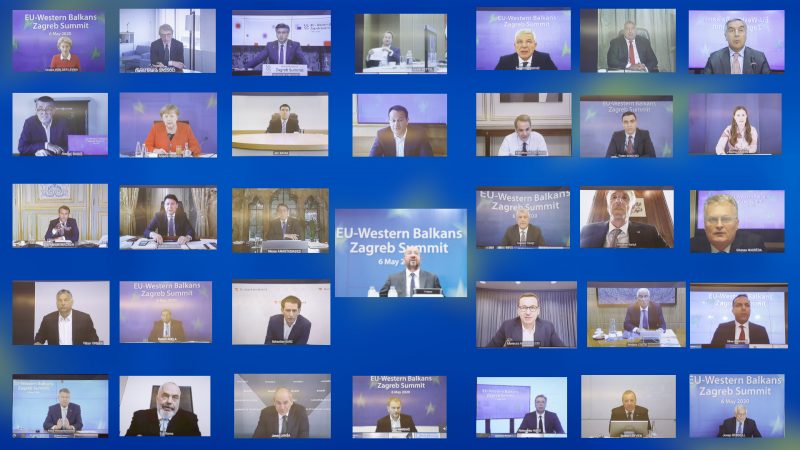 EU leaders confirmed their “unequivocal support for the European perspective” to their Western Balkans counterparts during a video-summit on Wednesday (6 May). However, the final declaration doesn’t make reference to a tangible time frame for the region’s accession to the bloc.

In fact, while many in the Balkans bear high hopes of joining the EU, the summit might have left them disappointed. Accession negotiations, some of which have been going on for years, were not mentioned.

The draft declaration of Wednesday’s (6 May) EU summit with the leaders of the Western Balkans, seen by EURACTIV, calls on North Macedonia to find a solution to bilateral disputes in the implementation of the Treaty on Good Neighborhood Relations with Bulgaria.

EU leaders will hold a summit with their colleagues from the Western Balkans in the form of a teleconference. Before the COVID-19 pandemic erupted, the summit was to be held in Zagreb, under the Croatian presidency, with the participation of the EU 27 leaders and their colleagues from Serbia, Montenegro, Albania, Northern Macedonia, Bosnia and Herzegovina and Kosovo. The populist leader of Italy’s far-right League party, who stood at the top of the polls, immediately pounced on the opportunity to promote his core nationalist ideas while disparaging the government, hoping to trigger the elections that he hoped would make him prime minister. But in an unexpected twist, Salvini’s dream of capitalizing on COVID-19 is being thwarted.

It’s early yet, but Salvini could turn into one of the most prominent political casualties of the pandemic. The golden boy of Europe’s anti-immigration populists, Salvini led the League—formerly the Northern League—to a first-place finish in elections for the European parliament a year ago.

His spectacular rise was propelled by the refugee and migrant crisis that brought hundreds of thousands of people from Africa and the Middle East to Italy’s shores, giving him a platform against immigration, and a new argument for opposing the European Union and its approach to the crisis. His populist theatrics raised his profile and his party’s fortunes.

Mixed messages from the highest levels of government. A lack of coordination among key officials. Sidelining experts with key experience. A failure to prepare and downplaying the consequences of failure. Seeking the quick fix and failing to do the hard work to achieve success for the American people.

These are critiques that have been leveled at the White House’s failed response to the current pandemic, but these are also traits on vivid display in the Administration’s failed handling of an even more dangers set of issues: America’s nuclear security.

All of the nuclear challenges facing the United States – including those President Trump inherited and those of his own making – are getting worse. The risk of nuclear use, of nuclear instability and the proliferation of nuclear weapons continue to increase and the actions being pursued (or ignored) by this administration are creating more chaos than security.

This is the central finding of a new report by the American Nuclear Policy Initiative: “Blundering Toward Nuclear Chaos: The Trump Administration After 3 Years,” with contributions by some of the most insightful nuclear experts in the country.

Little is known about the X-37B space plane and what, exactly, it’s been doing during missions that now total nearly eight years in orbit. On Wednesday, the U.S. Air Force revealed some of the satellite payloads and experiments it will carry aloft this month, including one that will try converting the sun’s energy into a form that can be sent to Earth.

“The U.S. Naval Research Laboratory, will transform solar power into radio frequency microwave energy which could then be transmitted to the ground,” Air Force officials told reporters during a telephone briefing.

Source: The Air Force’s Secret Space Plane Is Part of A Plan to One Day Shoot Microwaves to Earth – Defense One

As in the aftermath of the 2008 global financial crisis, many observers are speculating that the coronavirus pandemic will boost China’s global influence, and diminish the United States’.

It is not difficult to understand their reasoning. The United States has more than 1.2 million confirmed COVID-19 infections, over four times as many as second-place Spain.

More than 26 million Americans filed jobless claims through the week ending on April 18, probably putting the country’s unemployment rate in the neighborhood of 20 percent, and the International Monetary Fund forecasts that the American economy will contract by nearly six percent this year.

The U.S. response to the pandemic has gone from insouciance to incoherence, with the federal government and state governments increasingly clashing over how best to balance the imperatives of safeguarding public health and stimulating economic recovery. Perhaps most alarmingly, the United States struggled to provide its hardest-hit hospitals with personal protective equipment almost immediately after the virus breached its borders.

Its domestic dysfunction deepens alongside its international abdication: the New York Times observed recently that “this is perhaps the first global crisis in more than a century where no one is even looking to the United States for leadership.”

Source: Can China Use the Pandemic to Displace the US? – Defense One

With human contact tracers in low supply, some states are turning to smartphone apps to notify individuals that they have been exposed and should isolate themselves so they don’t continue spreading the disease. Experts say contact tracing will be especially important as officials look to lift lockdown orders.

But the apps—some of which are in use in other countries—are not created equally. Some rely on specific geolocation services, and some of them work in conjunction with a central database of individuals who have tested positive for the coronavirus.

This use of sensitive information stokes concerns from privacy and civil liberty advocates about the potential for data misuse.

This spring, President Donald Trump declared that he would halt U.S. funding for the World Health Organization, previously more than $400 million annually—and he announced this right in the midst of a global pandemic.

A week later, Chinese President Xi Jinping pledged another $30 million—which would nowhere near make up for the shortfall (not to mention that China still owes the organization $60 million in membership dues, an amount the WHO expects to get later this year).

But the moment was a clear case in point for China’s success at checkbook diplomacy, in which the amount matters less than the message: You can’t count on the U.S., but you can count on us.

Source: China Is Buying Global Influence on the Cheap – Defense One

In recent weeks, volunteers from consulting and private equity firms have stepped up to offer their services to help lead presidential son-in-law Jared Kushner’s effort to coordinate a federal response to the coronavirus pandemic. Their willingness to serve their country in a time of great need is laudable.

It isn’t, however, the best way to address a national crisis. What the country needs right now is the steady, knowledgeable hand of experienced government officials.

The Washington Post reported that Kushner’s volunteers, several of whom have taken vacation time from their private sector jobs to serve as officially designated “special government employees,” were often asked to oversee initiatives with which they had little experience. This was particularly true of the effort to secure personal protective equipment for hospitals across the country.

“The nature and scale of the response seemed grossly inadequate,” one of the volunteers told the New York Times. “It was bureaucratic cycles of chaos.”

Acting leaders of federal agencies would serve for a maximum of four months under a new measure from Democratic House leadership that would seek to close many of the loopholes that have allowed President Trump and his predecessors to circumvent federal vacancy laws.

The Accountability for Acting Officials Act (H.R. 6689) would seek to prevent presidents from naming individuals to positions for the sole purpose of elevating them to a vacant Senate-confirmed role in an acting capacity. Trump has exploited this “first assistant” loophole on multiple occasions, altering lines of succession so an individual outside of government could head up an agency without the Senate’s advice and consent.

The bill, introduced by Rep. Katie Porter, D-Calif., and cosponsored by every House committee chairman, would require all first assistants to have already served in their roles before the position to which they are being elevated went vacant.