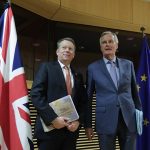 Nearly four years after the UK voted to leave the European Union, we are back to a familiar conundrum: deal or no deal. Except that this time we are talking about the trade agreement that will govern future EU-UK relations.

If the result is ‘no deal’, the UK will leave the Single Market on 1 January and trade with the EU on World Trade Organisation terms.

So what are the main dividing lines?

It has also rejected the EU’s demands for unchanged access to UK fishing waters, the UK committing not to roll back standards in environment and labor law – known as the ‘level playing field’ – and the UK following EU state aid law now and into the future.

This is the price the EU is asking for a free trade agreement. But on all three counts little progress has been made.

UK ministers complain that the EU does not recognize the UK as a sovereign equal.

“The EU, essentially, wants us to obey the rules of their club, even though we’re no longer members,” Cabinet minister Michael Gove told the House of Commons this month.