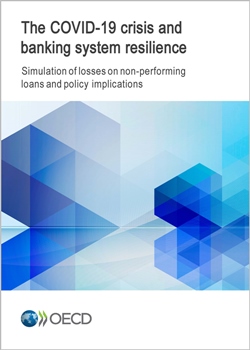 This paper outlines the findings of a simulation analysis that assesses the extent of the potential rise in bank NPLs, taking into consideration assumptions under extensive monetary and fiscal support versus a scenario without continued support measures in keeping with conditions that prevailed in the 2008-2009 Global Financial Crisis. The paper also investigates the subsequent implications for bank capital and discusses whether policy responses may be needed to clean balance sheets.

Artificial intelligence (AI) technologies hold big promise for the financial services industry, but they also bring risks that must be addressed with the right governance approaches, according to a white paper by a group of academics and executives from the financial services and technology industries, published by Wharton AI for Business.

Wharton is the academic partner of the group, which calls itself Artificial Intelligence/Machine Learning Risk & Security, or AIRS. Based in New York City, the AIRS working group was formed in 2019, and includes about 40 academics and industry practitioners.

The white paper details the opportunities and challenges of implementing AI strategies by financial firms and how they could identify, categorize, and mitigate potential risks by designing appropriate governance frameworks.

Source: How Can Financial Institutions Prepare for AI Risks? – Knowledge@Wharton

Retailers must create “wow” shopping experiences if they want to satisfy customers and keep them coming back, according to a recent study from Wharton’s Baker Retailing Center and The Verde Group, a global customer experience consultancy.

The survey-based study found that retailers can increase shopper repurchase intent by nearly 60% by consistently delivering a great experience, whether in-store or online. What defines a “wow” depends on the shopper and type of store, but hassle-free customer support is at the top of the list.

Source: Want to Make Retail Customers Happy? Give Them a ‘Wow’ Experience – Knowledge@Wharton

Older Americans are accumulating more debt as they near retirement, according to recent research that reveals a troubling trend in personal finance among people in their 50s and early 60s.

Just when they should be reaching the peak of their retirement savings, this group is still paying off mortgages and grappling with credit card debt, medical bills, and student loans. The burden is leaving them stressed, harassed by bill collectors, and worried about their financial future as the clock ticks down on their income-earning years.

Source: Why Older Americans Are Taking on More Debt – Knowledge@Wharton

Sharon Stone wants you to know that she’s a survivor. And it would be easy to assume that her new memoir, The Beauty of Living Twice, draws its title from its opening passage—which describes her 2001 hospitalization after suffering a brain hemorrhage and stroke that left her with a 1% chance of survival. But the book contains an entire lifetime marked by beating the odds.

Stone details miraculously surviving near-decapitation, being struck by lightning and walking away from her totaled car after skidding on black ice. The most compelling passages, however, are the clear-eyed, and at times brutally honest, recollections of how she’s persevered in the wake of trauma inflicted not by nature or accident but by other people, ranging from the physical and sexual abuse she experienced as a child to the many ways her consent has been undermined at work and beyond.

IBM (NYSE: IBM) today announced that Kyndryl will be the name of the new, independent company that will be created following the separation of its Managed Infrastructure Services business, which is expected to occur by the end of 2021.

“Kyndryl evokes the spirit of true partnership and growth,” said Martin Schroeter, Chief Executive Officer of Kyndryl. “Customers around the world will come to know Kyndryl as a brand that runs the vital systems at the heart of progress, and an independent company with the best global talent in the industry.”